Thanks to Adam for sending in this post about the building of “Colossus”! Check out more at Maniacal Labs.

The 2014 NC Maker Faire was a huge turning point for Maniacal Labs. It was there that the idea for the AllPixel and what is now BiblioPixel got their start. It’s also where we showed off our first custom-built LED display, the 24×24 LPD8806 matrix. At nearly 24 inches square, and 1 pixel per inch, it was certainly impressive. But we left the Maker Faire with a desire to go bigger. Not just more pixels… but physically larger. Much larger. We call it “Colossus”.

This idea floated around until around December of last year, as we wrapped up the AllPixel Kickstarter. The plan: Double the resolution to 24×48 and increase the size to 4′ x 8′. But this presented some immediate problems… First, no one made LED strips in such a low density (6 pixels per foot). Second, 4′ x 8′ would not fit in my house when complete, and it would be nearly impossible to transport without a box-truck.

So, the plan was modified after choosing a spot in the home office where it would go. The new dimensions would be 1m x 2m (it was decided this would make the math easier… down with English units!). But this still left the pixel density problem. True, we could have gone with more pixels, but this was prohibitive both in cost and the required CPU power to drive the display. We then realized that the least dense we could get was the “Christmas style”, WS2812, string lights with a 12mm LED every 10-15cm along the string. They come in strings of 50 pixels, which was perfect. Even more perfect… they were cheaper than some of the LED strips. Instead of 24×48, we could do 25×50 and space the pixels 40mm apart. So, we called up our LED guy in China and ordered up a couple thousand lights… 1250 for the display and some extras for Christmas this year 🙂 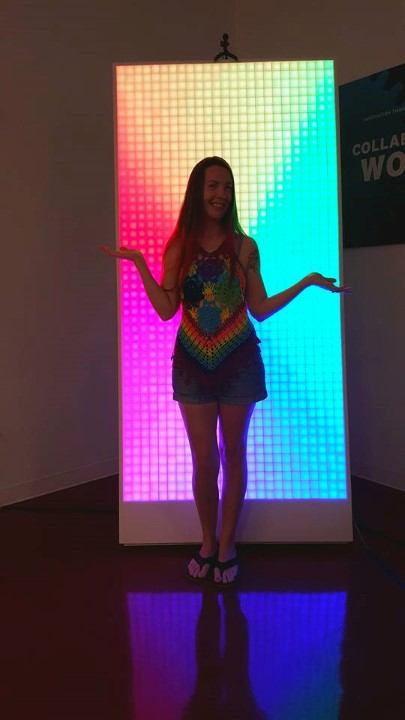