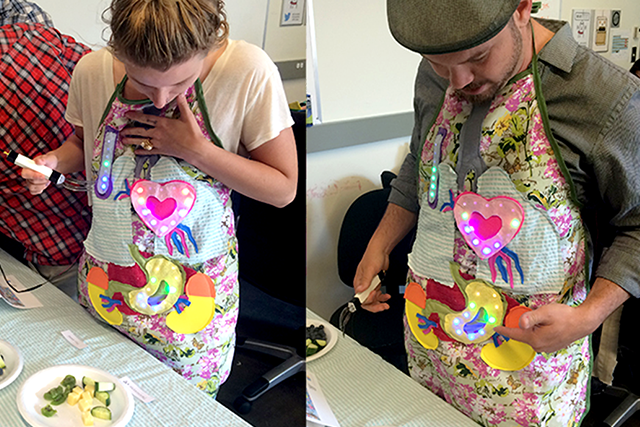 Get ready to love Fruit Fever invented by a team in Quebec Canada for *CriticalHit15, a summer incubator for experimental games. The team created an apron decorated with LED embellished patches to resemble functions of the body like temperature, heart, and stomach. These areas react to different foods sampled by a fork, which is actually measuring their resistance. Arduino programming works the magic of the game, teaching you how to eat certain foods in the best order for your body. It’s fun to watch the tester in the video figuring out how a single blueberry can affect different functions. I think it’s hard enough to remember to eat the right variety of foods in a day, let alone concentrate on the most beneficial order!

I talked to team member Milin Li about the project, and she described it’s interesting origins.

We brainstormed until we came up with two words “virus” and “Voodoo”. We broke the two words down “virus” being sickness or anything that brings harm to the human body virally and the word “voodoo” which we use to describe what tribes use to counter sickness with natural remedies.

You can see the team ended up with something more tangible dealing with nutrition. In fact, they were very influenced by the phrase, “What you eat will affect your body”.  While working on their game idea they discovered another existing game called Pixelate, a guitar hero style eating game. They liked this game’s concept, but they wanted to move it from a screen based game to something wearable. Their apron not only adds a fun element, but there is more of an association with the different body parts and the connection to health. Something they did borrow from the existing game was the idea of making the fork a device for measuring resistance.

The fork is a regular metal fork that was cut in the middle into two pieces, one side was connected to the positive end and the other side to a negative end or ground. The body of the fork was created using a 3D printer, it’s purpose to protect the wires connected to the fork and to hold the fork together. The wires in the fork are then connected to the Arduino board,the same one the LED lights are connected to. 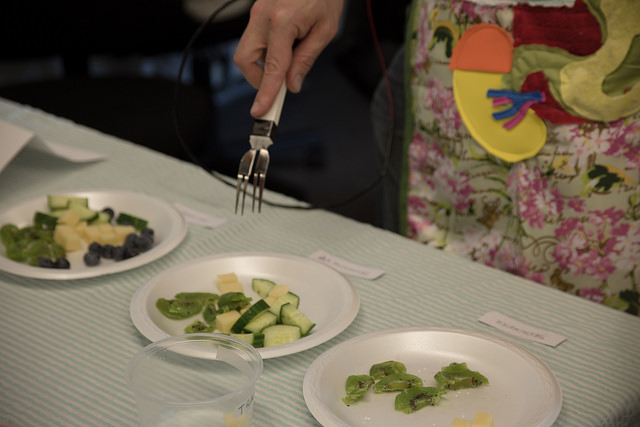 The team conducted their own experiments and figured out how to do the programming for the foods they selected. Apparently many of the foods were close in value and readings could easily be affected by the size of the food, so everything had to be precise. I’m sure most of the team had fun just amazing other groups with their tests as most people don’t consider food when it comes to hardware and gaming.

So far there are no future plans for the game, but I’m hoping that changes. To team Fruit Fever I’m sending high fives, woots and a fat heart emoji. Thank you, Monica, Owen, Tobias and Milin for bringing together a game that made me smile. I’m pretty sure this is going to make my top ten list of wearables for 2015! It also gets me thinking how fun it would be to have a “take your multimeter to lunch day”. We should let kids combine food, science and health in a fun way more often. To that end, I’m suggesting that everyone get their own handy Pocket Autoranging Digital Multimeter. You never know when you are going to be in a situation worthy of testing. Have fun exploring and don’t forget to eat your berries. 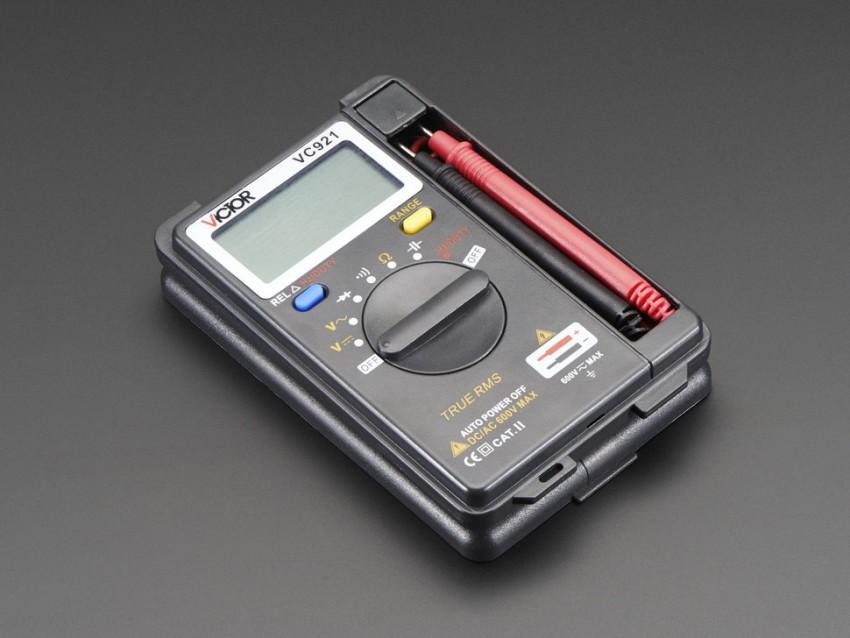 Comments Off on A Wearable Tech Game for Foodies #WearableWednesday