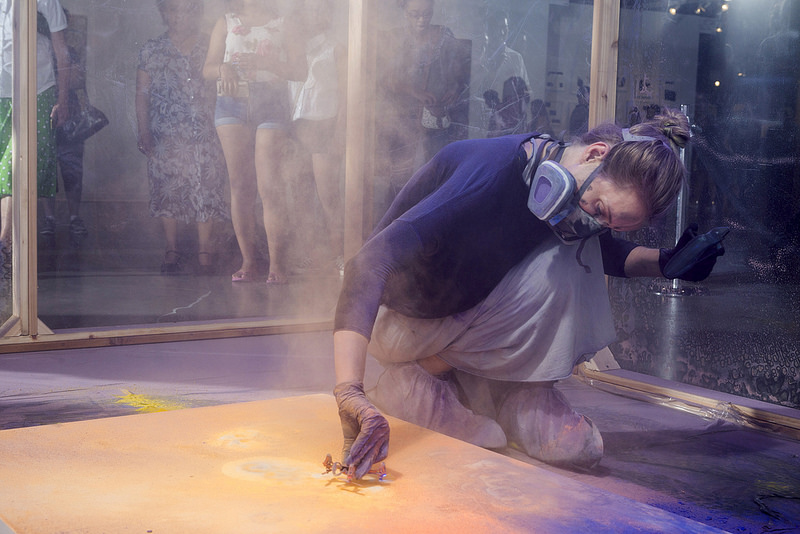 Addie Wagenknecht is an artist, hacker, and chair of the Open Hardware Summit at MIT. Here’s more info from the bio on her site:

Addie Wagenknecht is an American artist based in Austria, whose work explores the tension between expression and technology. She seeks to blend conceptual work with traditional forms of hacking and sculpture. Wagenknecht’s work employs a peculiar blend of hacking and visual aesthetics drenched by conceptualism. Previous exhibitions include MuseumsQuartier Wien, Vienna, Austria; La Gaîté Lyrique, Paris, France; The Istanbul Modern; and MU, Eindhoven, Netherlands.

Most recently Wagenknecht founded Deep Lab under a Warhol Foundation Grant. She was a member of Free Art & Technology (F.A.T.) Lab prior to its closure, and is the Chair of the Open Hardware Summit at MIT. Wagenknecht also co-produced the open source laser cutter Lasersaur.

Her work has been featured in numerous academic papers, books, and magazines, such as TIME, Wall Street Journal, Vanity Fair, The Economist, and The New York Times. She holds a Masters degree from the Interactive Telecommunications Program at New York University, and has previously held fellowships at Eyebeam Art + Technology Center in New York City, Culture Lab UK, Institute HyperWerk for Postindustrial Design Basel (CH), and The Frank-Ratchye STUDIO for Creative Inquiry at Carnegie Mellon University. She is represented by bitforms gallery in New York City.

“..it has to be said that Addie is one of the best artists working today. To me, she is capable of new media artworks with poetry and meaning, all carefully considered and blended together, when often works in this field are cold and esoteric.” – prosthetic knowledge

“.. her images are like avatars for the internet itself.”- Siofra McSherry, This is Tomorrow

“Addie Wagenknecht is an artist who casts an unwavering eye on the political issues of the post-Wikileaks world, taking in feminist discourse, pop culture, pornography, data, surveillance and drone technology – all approached with a refined artistic sensibility and sharp wit.” – Totally Dublin, June 2014

“.. she is an artist with a deep and playful understanding of some of today’s most exciting issues in both art and society: the mechanisms of the intangible, the faith in data and processes, and also the critique of the notion of authorship.” – we make money not art, July 2014

Check out her site, her profile at bitforms gallery, and this interview with we make money not art for more info on Addie and her work.

Below is a video of her project The Optimization of Parenthood in which a robot arm reacts whenever a baby is placed in a bassinet.