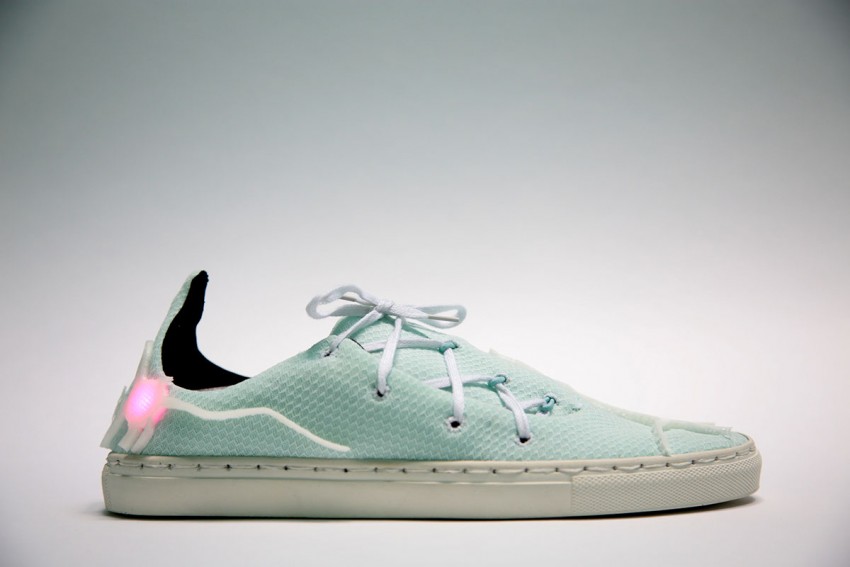 Chrissy Glover likes running, but she doesn’t like all the injuries that come with the exercise. This summer she attended a “Sneaker Design + Wearable Technology” class offered by Rhode Island School of Design with SLEM – an international innovation and education institute for footwear located in the Netherlands. She had the opportunity to design Strike—footwear that monitors the issues encountered with gait. Here’s her description:

I decided to create a “smart” running shoe that would help with injury prevention and detection in three ways: by recognizing when the runner’s gait differs from their norm, a sign that they may be compensating for an injury and should take time off; suggesting a forefoot foot strike; and detecting the precise location of an injury when one strikes. 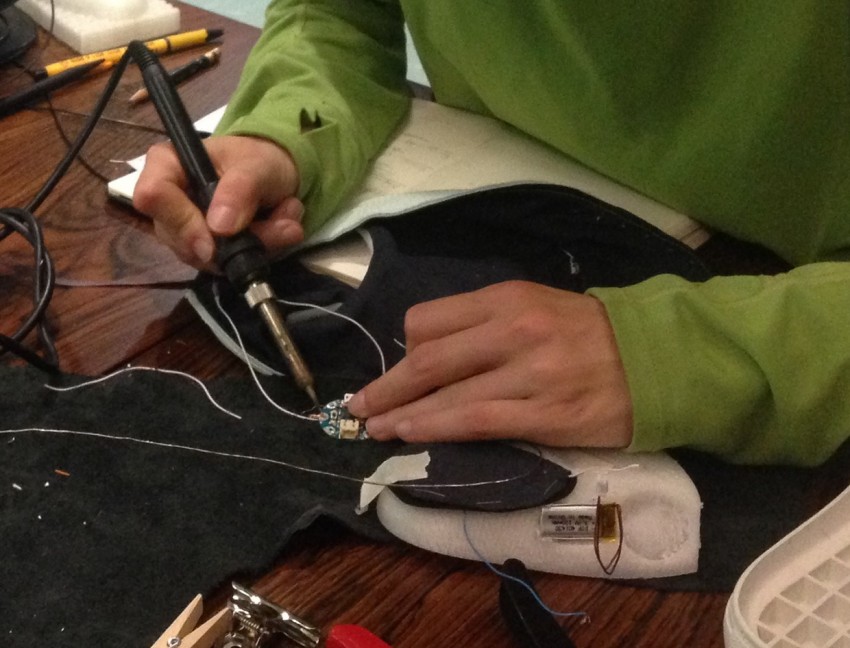 To create her prototype, Chrissy designed a 3D insole to contain the hardware and battery. She created a Velostat sensor in the heel pad and attached it to an Arduino GEMMA microcontroller and a piezo buzzer. This controller is small enough to fit in the cavity of the insole and also works nicely with NeoPixels, which she included on the outside of the shoe. If the runner strikes with the heel, the buzzer goes off along with red lights, warning the runner to use the forefoot to prevent injury. I like that Chrissy matched her NeoPixels in normal running mode to the color of the fabric of the sneakers. The monotone combo makes it easier to spot the red lights during a bad foot strike, and it just looks classy. She also used a sneaker with lacing on the side to prevent injury to the tendons on the top part of the foot.

Although her prototype uses a single velostat sensor in the heel, Chrissy imagines that there would be multiple sensors to track different areas of foot strike in the finished product. There would also be a datalogger or other means of storing the normal gait of the runner in order to determine unusual behaviors. Finally, she hopes that in the future there would be electrodes that would be able to identify the area of injury on the foot. That’s a lot to accomplish in a small space, but wearable tech gets smaller each year and I’m hopeful that her dream shoe will some day be on the market. Awesome job, Chrissy! For the rest of you limping around, you should get started on your own sneaker project with our Firewalker LED Sneakers guide. You’ll learn how to use Velostat as a sensor in sneakers to trigger colorful NeoPixels in a flaming pattern. These sneakers are a fave amongst teens and always get attention at cons. So, what are you waiting for? Get your kicks goin’!