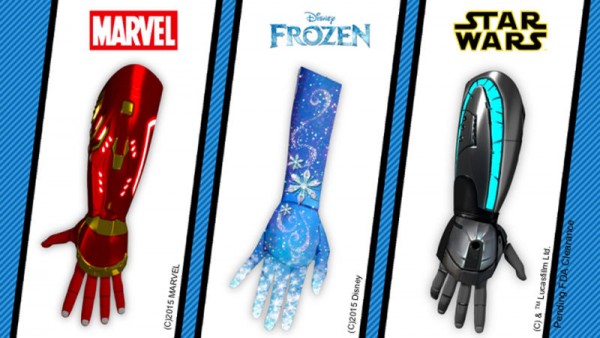 Open Bionics is all about creating affordable bionic arms for young amputees, and they’ve partnered with Disney to give their prosthetic arms some cosplay-esque flair. The new designs feature characters from Marvel, Disney, and Star Wars. The robotic hands look like Iron Man’s armor, Elsa’s glove from Frozen, and armor from Star Wars. The LED in the Star Wars armor changes colors and emits a lightsaber buzz sound effect.

Open Bionics can use the designs royalty-free because they’re part of Techstars’ Disney Accelerator program. Robotics engineer Joel Gibbard spent three months working on the products. Gibbard told The Independent, “Kids absolutely love them. They pick it up straight away. To them, the most exciting thing is the lights and the look of it, but once they start using it they start challenging themselves to pick up small objects and start stacking things.” He hopes to keep the cost to under $3,000.