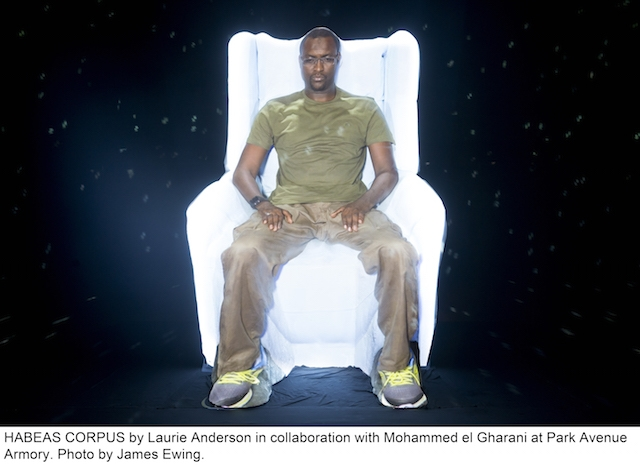 The Creator’s Project did a piece on Laurie Anderson’s installation at the Park Avenue Armory. The show is over now but you can read about it here. It sounds like it was completely incredible. Thanks to Alon for sharing!

In Latin, Habeas Corpus means “you have the body.” In law, it is a term referring to the legal action which allows individuals to petition grounds of imprisonment. It is also the name of Laurie Anderson’s poignant installation opening today at The Park Avenue Armory. “One thing about this show is that its so much about language,” the world-renowned multimedia artist advises me on the eve of the premiere. “Its about how you define a prisoner; how you define a person; how you define a non-person. Herein lies the intricacy of the story—within all these basic assumptions.”

HABEAS CORPUS is a unique collaboration between Anderson and Mohammed el Gharani, a 27-year-old Chadian who spent his formative years between the ages 14 and 21 locked in the cells of Guantanamo Bay. For the two days of the installation, Anderson and her team will live projection-mapping el Gharani as he sits on a La-Z-Boy-style armchair in a studio in West Africa (like all other detainees from the infamous prison, el Gharani is banned from ever entering the United States). Every hour, the live feed will break into pre-recorded segments of el Gharani’s recollections from those horrific eight years.

Upon entering the show, each visitor recieves an accompanying 15-page program. From this alone, the scope of HABEAS CORPUS is staggering. The program delineates how el Gharani was detained and convicted, how Anderson came across his story, how the project was made, information on the teams involved (both in New York and West Africa), technical detailing, and finally transcription of el Gharani’s stories—all of this printed, in devastating irony, on glossy legal-size paper. “There’s also a very extensive piece written by his lawyers about the case against him and how it was fabricated completely,” Anderson adds. “For someone who wants to drill down into the legality (and illegality) of all this, we’re giving them every opportunity to do that.”

She tells The Creators Project, “[The legal side] is something that I’ve never done in an artwork. Generally, I don’t have to look at that issue.” The difference, she cites, is the question of creative ownership. “When I am doing someone else’s story I have to be completely, absolutely clear that I’m representing it the right way. And I like that because its a good exercise for me to tell a story the way it really is, and not the way it could be or should be. The easiest thing is to go for that punchline. You have to end your story somehow and you look for that. But very few situations have convenient punchlines. My life doesn’t have one. My life doesn’t have a plot, it doesn’t have any of those story-like elements in it. They have to be imposed. That’s the line I’m kind of working between. His story and how I’m representing it as a work of art.”

The next stage of the show is a triad of artworks divided into three of the Armory’s spectacular rooms. Two of these pertain directly to el Gharani’s story and the third is more exterior—a small scale, 3D-projected film titled From The Air. The first, the main event, is housed in the Armory’s cavernous drill hall. 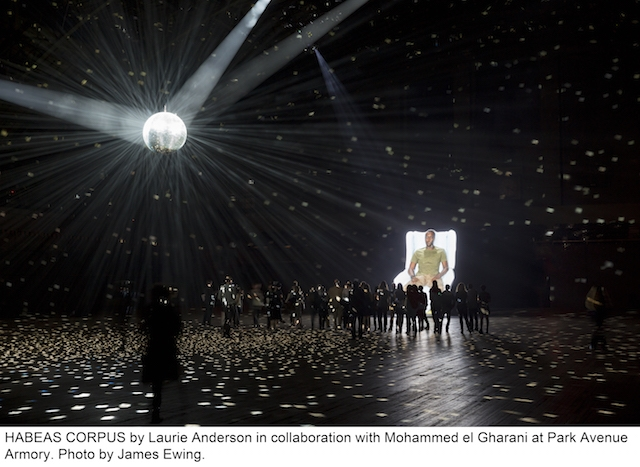