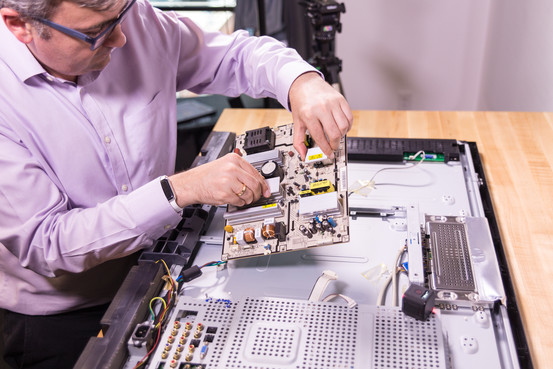 Article from last month on the Wall Street Journal from Geoffrey A. Fowler.

We don’t have to keep buying new gadgets. In fact, we should insist on the right to keep old ones running.

Who hasn’t experienced a situation like this? Halfway through a classic Jack Lemmon DVD, my colleague Shira’s 40-inch TV conked out. Nothing showed up on the screen when she pressed the power button. The TV just hiccupped, going, “Clip-clop. Clip-clop.”

This was a great excuse to dump her old Samsung and buy a shiny new TV, right? But before heading to Best Buy, Shira gave me a call hoping for a less expensive option, not to mention one that’s better for the environment.

We ended up with a project that changed my view on our shop-till-you-drop gadget culture. We can fix more technology than we realize, but the electronics industry doesn’t want us to know that. In many ways, it’s obstructing us.

There’s a fight brewing between giant tech companies and tinkerers that could impact how we repair gadgets or choose the shop where we get it done by a pro. At issue: Who owns the knowledge required to take apart and repair TVs, phones and other electronics?

Manufacturers stop us by controlling repair plans and limiting access to parts. Some even employ digital software locks to keep us from making changes or repairs. This may not always be planned obsolescence, but it’s certainly intentional obfuscation.

Thankfully, the Internet is making it harder for them to get away with it. My first stop with Shira’s TV, a 2008 model, was Samsung itself. On its website, I registered the TV and described what was broken.

With a little googling of the TV model, I found our problem wasn’t unique: Samsung was taken to court about this exact issue, caused by a busted component called a capacitor. Samsung settled in 2012 by agreeing to extend warranties for 18 months on certain TVs, including this one. It also kept repairing the problem at no cost for a while after.

But when a Samsung support rep called back, she said they’d no longer fix the problem free. She passed me to an authorized Samsung repair shop in my area. They said they’d charge $90 for an estimate, and at least $125 plus parts for a repair. Buying a similar-size Samsung TV today costs $380. Why wouldn’t Shira just buy a new TV? She felt guilty. Even recycled e-waste can end up in toxic dumps in the developing world.

Enter Plan B: I found a ton of people talking online about this TV’s broken capacitors. There were even a few folks selling DIY repair kits. The parts cost…wait for it…$12.