Honestly? I doubt I’ll make it. Spent -so- -much- -time- trying to salvage that helmet that should have been put into other things. Also, I don’t actually have until Halloween proper…need to hand this off to Erin Thursday night! Interesting times.

Following the advice of the “Last-Minute Costume” post, we do have a backup plan and are prioritizing. If the wings can’t be fully servo-ized in time, they’ll be set in a fixed position (but the set still needs to be wearable), and I’ll come back to it after Halloween as a personal project. Erin dresses up at events all year ’round, so falling short for Halloween is a bummer but not the end of the world.

The Ruiz brothers sent me a spare print they had of the helmet. I did not attempt to resin-coat this one, nope. Learned my lesson the last time. Raw. 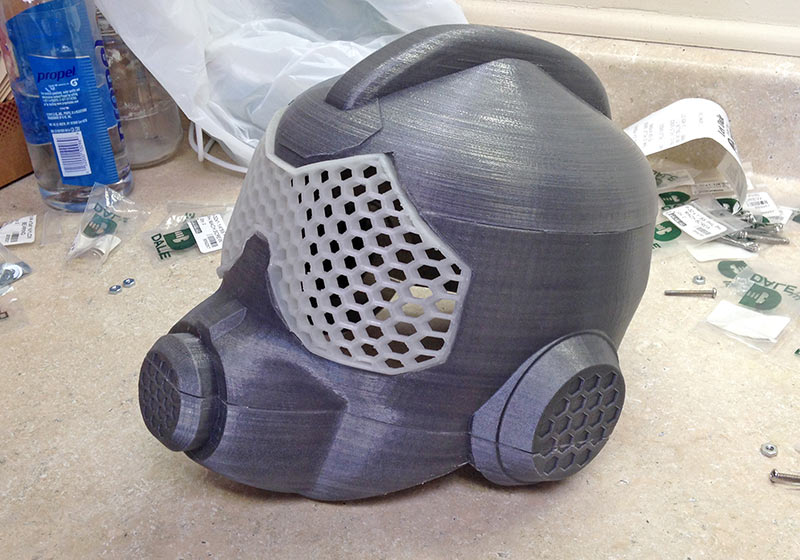 Had to print my own eye mesh here (it glows in the dark!), and reshape it a little with a heat gun until it fit (different printers have slightly different ideas about the sizes of things, so jobs split across multiple printers don’t always come together nicely).

I’d really wanted a bulletproof smooth helmet, but Erin says the 3D-printed-ness has good “showoff value.” If anyone inquires, it’s a good segue into discussing 3D printing. So I handed this off to her today, fortunately she has a little time to add a Trinket and some NeoPixels inside. Big relief with so much on my plate!

Every good hero needs a utility belt! In a prior post I’d mentioned the value of “analog crafts” — the bits of a maker-y project that don’t involve soldering or code. I’m not great at the analog craft of sewing, but know just enough to not injure myself too badly. Getting the topology right on an adjustable belt with triglides (those things that hold the slack, so you don’t have dangly belt ends) is immensely satisfying and worthy of a merit badge! This will have some little pouches and greebles added, but that might need to wait ’til post-Halloween.

Then there’s the wings. Remember from the prior post, the back plate holding the wings has compound curves for added strength and comfort — it’s not a flat plane. But now I have these wings that basically need to move in a plane. In olden days™ I might’ve messed around with blocks of wood, shaping things though trial-and-error until the gap between plane and not-plane was filled. I don’t have time for that. I also don’t have Erin’s back available, so I’m really not certain exactly what plane everything needs to be in…there’s got to be some kind of adjustment possible. So I borrowed an idea from the collimator screws of reflector telescopes…a triad of screws that position a mirror just so in alignment with the tube. 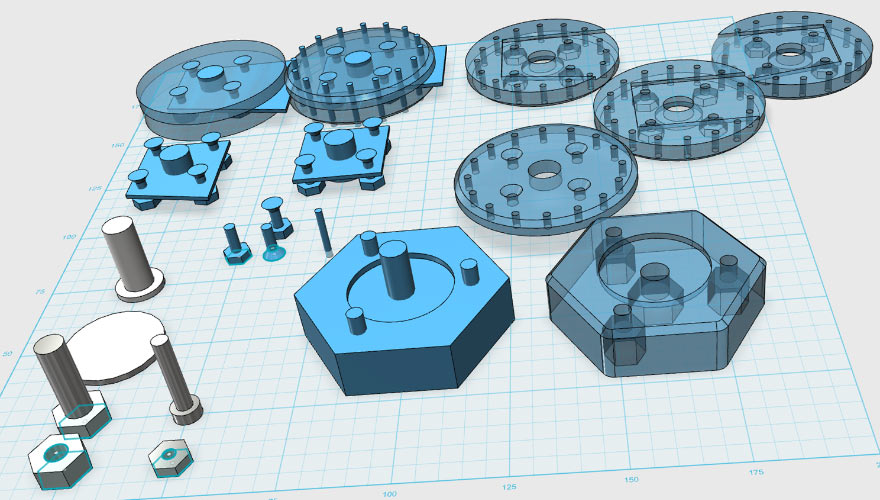 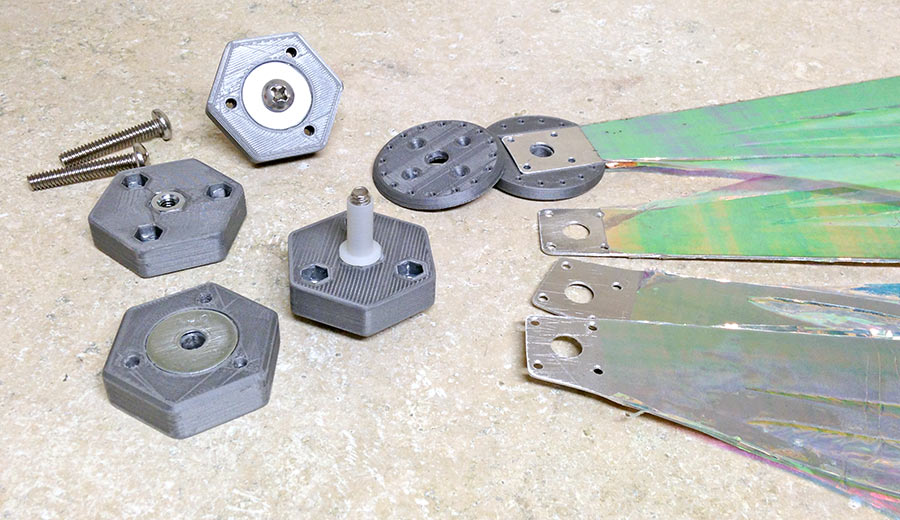 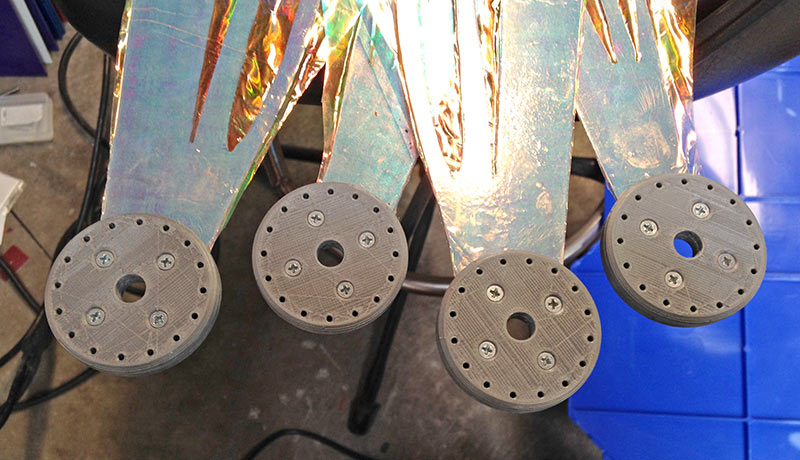 The pattern of holes around the edge is to allow a servo ball link to be installed later. I don’t know exactly where around the circle the ball links will go, so I just put a pattern of 16 all the way ’round and one will get picked as the winner later. Hopefully it looks cool and industrial.

Then, on the back plate, three screws for each wing mount… 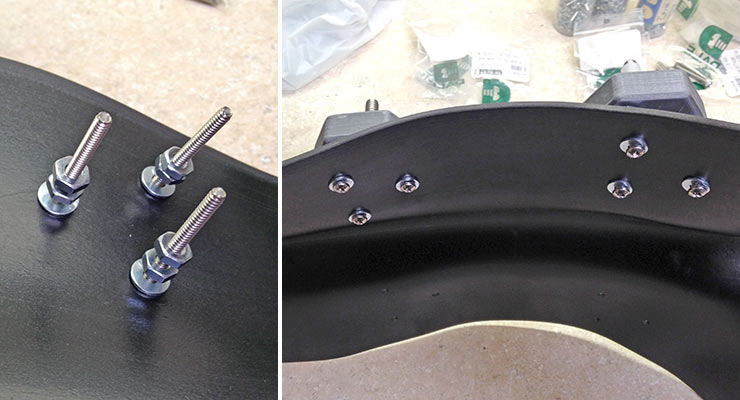 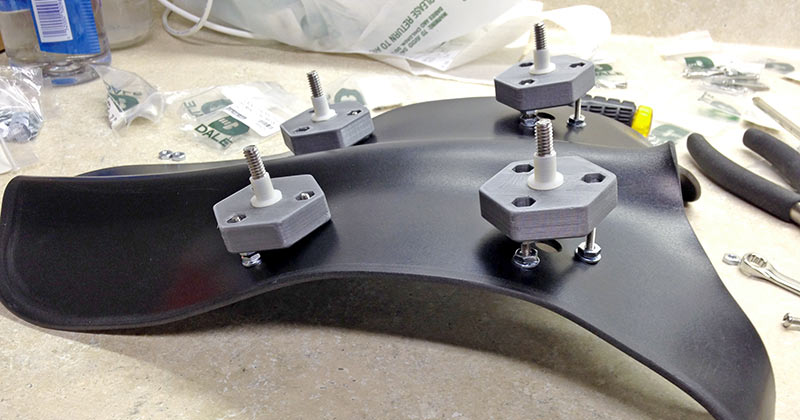 I’m just guessing at this stage, Erin wasn’t around, so the angles may still need to be adjusted later. The point is, I can do that with this arrangement.

Still in the “no idea” department was how to join the rigid wing plate to the fabric of the backpack. Complicating things, I wanted to still be able to access the set screws for later adjustments, but have the screw heads covered so they’re not all back-stabby.

Somehow I needed to add bolts through the back plate and backpack material, while again avoiding back-stabby-ness. Well hey, fortunately there’s that “spine protector” channel right down the middle. I quickly modeled these little “pillow loafs” that capture two nuts, while a screw comes in from the back. These are cinched down to hold the two different materials securely… 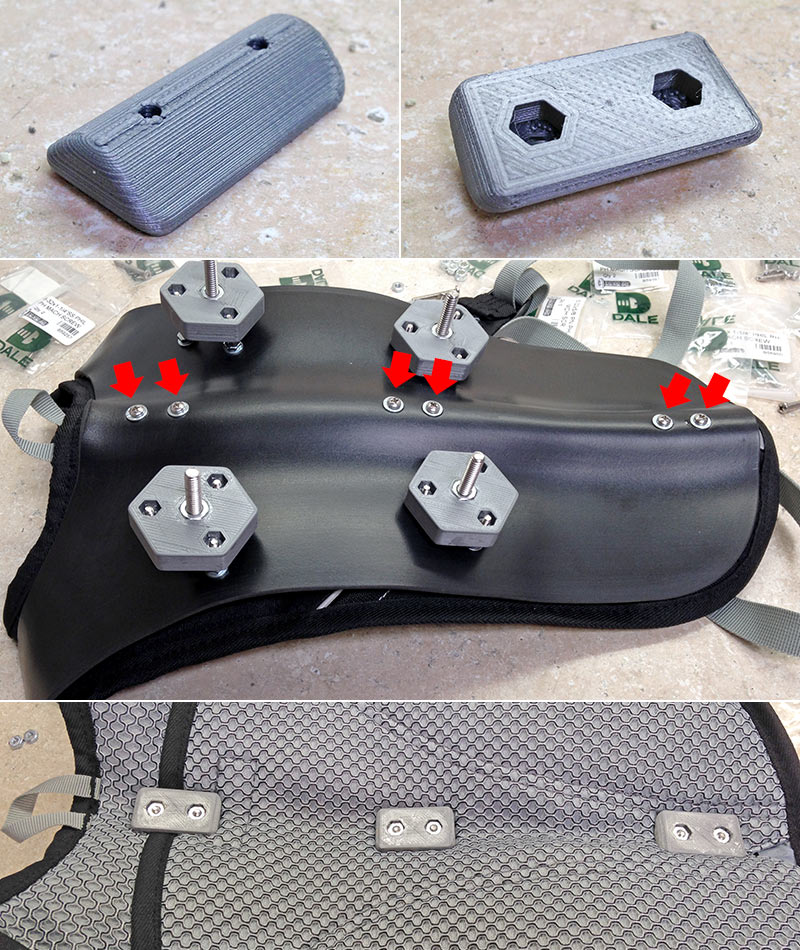 Drilling through the back plate is straightforward. Putting holes through the backpack material less so. A hole punch and grommets would be The Right Thing To Do to avoid fraying, but I didn’t have time for that.

Normally I’m adamant, foaming-at-the-mouth religious that one should never use a soldering iron for anything other than soldering. (You know how sewing people go all wild-eyed about people using fabric scissors on paper? I’m exactly like that, except soldering iron.) Luckily I have a “hazardous duty” iron around specifically to abuse for situations like this…I never solder with that one, it’s trashed (think it’s the first iron I ever owned, which would put it in the Middle Triassic period), but perfect for poking holes in synthetic fabrics while cauterizing the wounds. Sometimes being a pack-rat pays off.

So that bears most of the weight, but it’s just down the middle. To keep material from flapping up at the edges, I glued Velcro® strip all the way ’round the perimeter. This is A-OK because it’s not load bearing. I would not attempt to hold the entire backpack up with this! 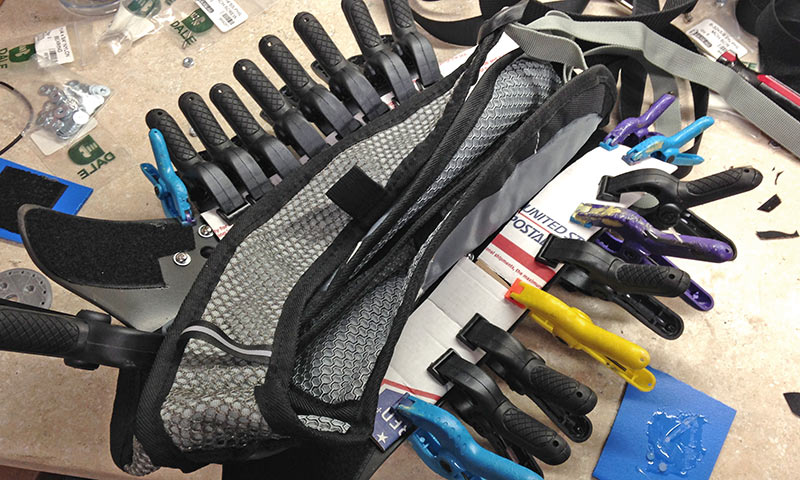 There was a closeout sale on clamps a few months back. I went nuts. No regrets.

Now, if I need to adjust the angles of the wing supports, I just peel back the flap to access the screws.

Finally, I had Erin over for a test fitting. No servos yet, just needed to confirm all the parts fit and sat at the right angles… 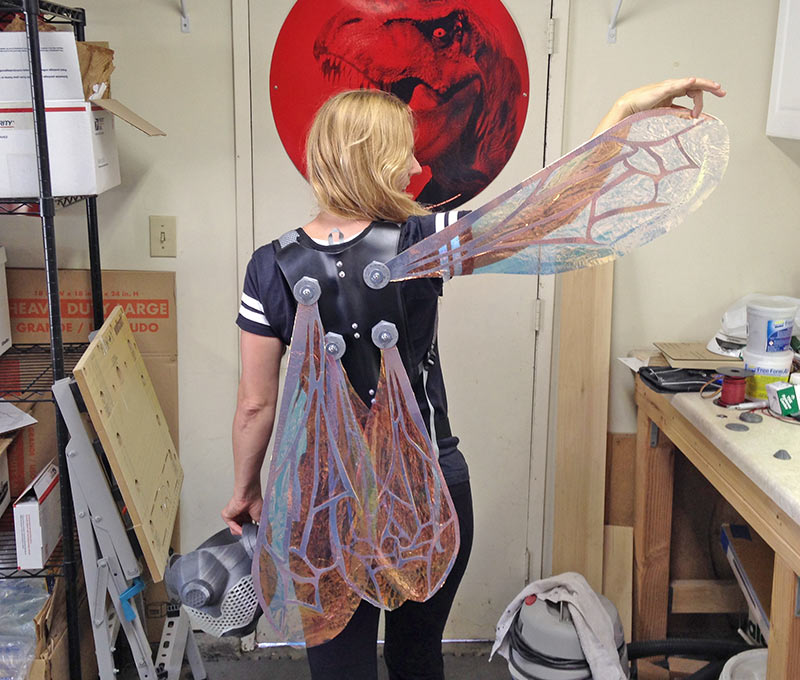 Success! I didn’t even need to tweak the planes, this’ll work as-is.

Servos, controller and battery remain. Possibly EL wire if there’s time. Y’know, the electronic parts of #ElectronicHalloween. But if not, it should “degrade gracefully” at this point…the backpack fits and holds wings, even if they don’t move yet. Going forward is a series of upgrades then, but not catastrophic if any one doesn’t work out. A little reassurance in an otherwise all-panicky-flaily situation. Playing dress-up is Serious Business!

Comments Off on #ElectronicHalloween 2015 at Adafruit – 10/27 Update