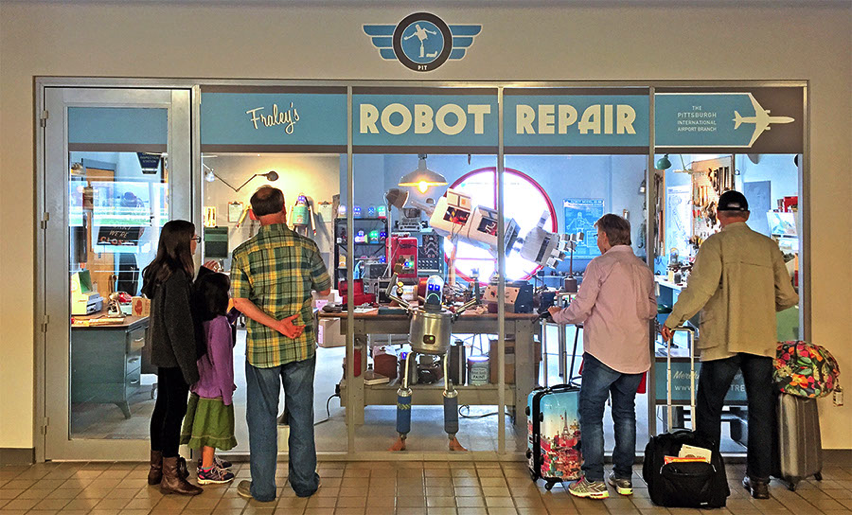 Artist Toby Atticus Fraley wrote in to share his latest project with us – a crowdfunded exhibit that is open in Pittsburg International Airport called Fraley’s Robot Repair. Here’s some more information from pitairport.com:

The Airport Authority’s Art in the Airport Committee has invited Fraley to bring back his popular ‘Robot Repair Shop’ for airport travelers. The artist has launched a new website, www.pitrobotrepair.com, and a Kickstarter crowd funding campaign, to raise money for the installation expected to open in September 2015.

“Pittsburgh International Airport has shown a commitment to public art and regional artists, and this space provides a great opportunity to showcase regional projects to visitors from across the country and globe,” said Fraley, who received the 2012 Mayor’s Award for Public Art. “I still hear from people asking me to bring it back, and I’m excited to do so in partnership with Pittsburgh International Airport.”

The Airport Authority is providing the space at no charge and assisted in preparing the area for the art exhibit.

“We look forward to having one of Pittsburgh’s most beloved art installations at Pittsburgh International Airport,” CEO Christina Cassotis said. “Having the essence of the region at the airport through art and other iconic things is important.”

The airport installation will be three times larger than Fraley’s original site, which was located in a vacant storefront on Sixth Street from 2011 to 2012. The new Robot Repair Shop will be situated in Concourse A near Southwest Airlines gate A15.

While visitors may recognize a few components of the original installation, the Robot Repair Shop at Pittsburgh International Airport will be an entirely new work. The original shop depicted a fictitious business where the owners left for vacation, leaving robots in various stages of repair, including one peering through the store windows longing for life in the outside world. The scene appears to be set in the future, where robot ownership is commonplace, with a 1950’s aesthetic.

“The Airport Authority is pleased to offer a new space for the Robot Repair Shop as part of our expanding Art in the Airport,” said Richard Belotti, Vice President of Planning. “We know that the original installation was very successful, and we are delighted that millions of travelers each year will once again be able to experience this unique and playful piece.”

The original Fraley’s Robot Repair was part of Project Pop Up Pittsburgh: Downtown, a collaboration between the Mayor’s Office, the Urban Redevelopment Authority, Department of City Planning, Pittsburgh Downtown Partnership and Office of Public Art, to fill vacant storefronts with creative start-up businesses, art installations or performances as a means to attract permanent tenants.

Read more and check out more info and photos here. 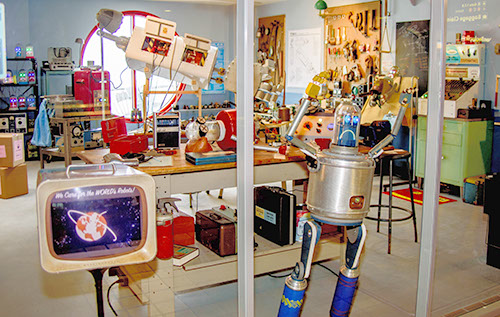