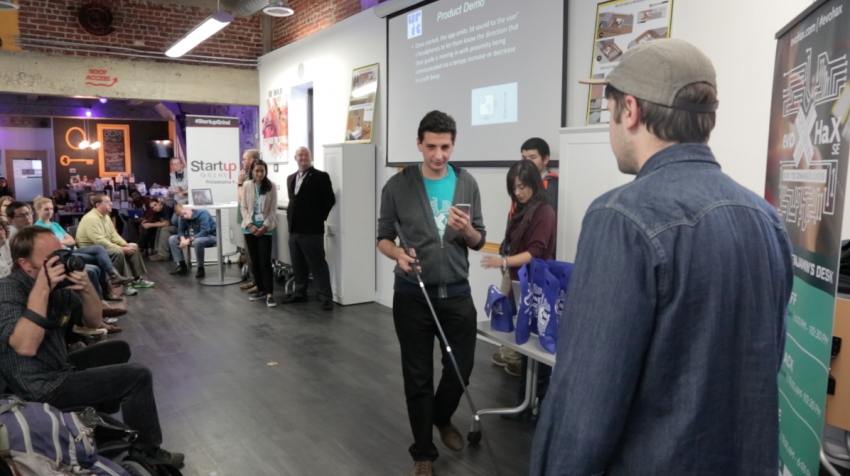 This weekend I was a judge for EvoHaX, a hackathon in Philadelphia based on increasing accessibility for all people. This year’s focus was on wearable tech, so you know I was all in. Teams worked with developers, therapists and end users, so it was a rare experience to have all the right people in one room. The West Chester University team pictured above worked with someone with low vision and developed an app called ur it to allow for more freedom in navigation. Usually someone with the challenge of vision needs help navigating a crowded room to find a friend. The team decided that the friend should be given a beacon, while the seeker uses the app on their phone to navigate. A series of beeps quicken like a metal detector when close to the target friend. 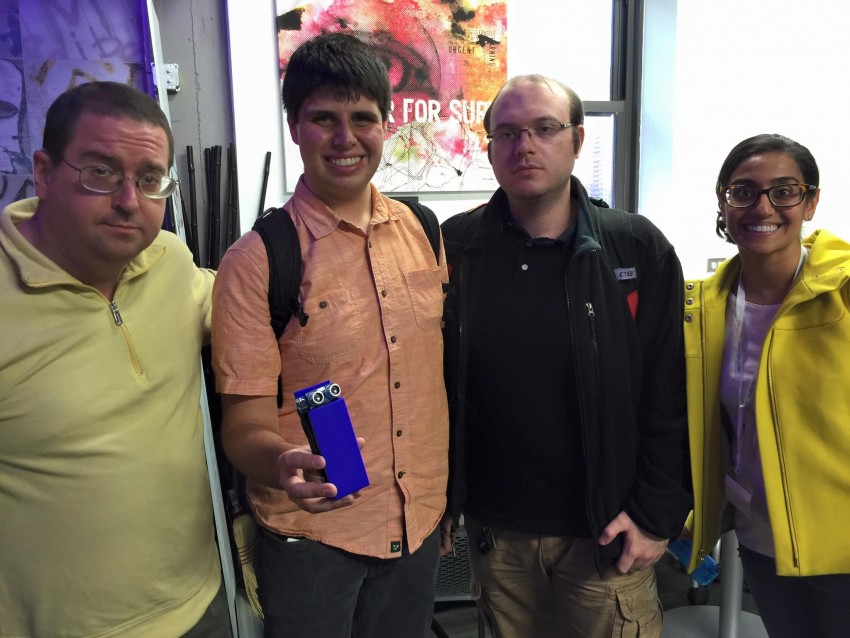 This team caught my eye with their spiffy hardware called Haptic High Five. Their project gets it’s start from the unfortunate situation of someone who was bitten by a dog because they could not hear the warning growl. The team created a 3D printed box with an Arduino connected to an ultrasonic sensor and microphone. I spy an Adafruit logo on that mic! Anyway, the box can be placed in a pocket and emits a warning vibration based on proximity. Although the device needs some tweaking to be more multi-directional, the team is off to a sound start for a needed product. 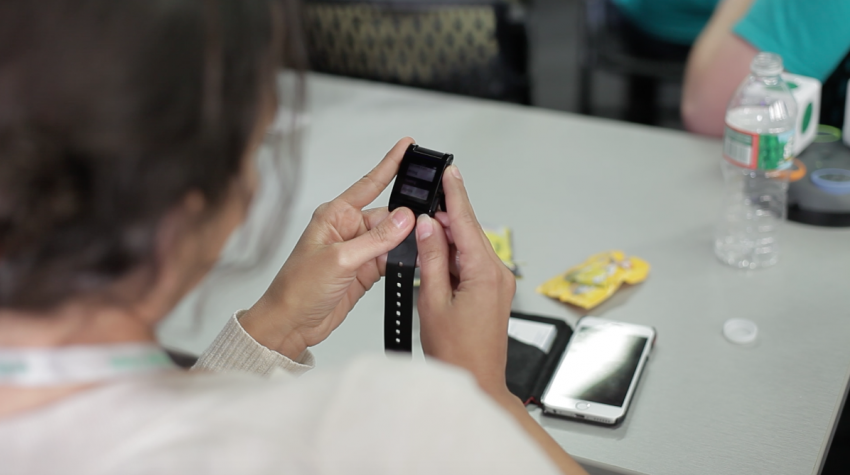 Hey ho, that’s a Pebble! The Blue Steel team was matched with people that have cognitive disabilities like ADHD and Dyslexia. One of the biggest challenges they face is time management, because it may take longer to read or write. So, with the help of a Pebble watch and an app, the team created a system that allows you to track your tasks. The watch checks in to see how you are doing with cute messages and and also reminds you to take a break. So, you learn to recognize what time of day works best for you and can also see how much time it is taking to do your tasks. This type of history is actually important for students in special programs to share with their teachers, as well as people that have MS to share with their doctors. Future plans include incorporating GPS, which may really prove helpful in tracking best conditions for accomplishing tasks.

If there was a category for “Best Use of Hardware”, the Red Team certainly would have claimed it. Was it the fact that their team was a mashup itself of students from Carnegie Mellon University and University of Maryland? They certainly divided and conquered with this match of Google Glass and Leap Motion to work on the problem of depth of vision. Although both devices had some limitations, whether it was camera or available data, they were able to create a heat map to indicate relative distance. So, in this case you can clearly see the different colors on the hands in the screen. I was impressed with the amount of programming they were able to do in the short amount of time, and they definitely earned their 2nd place rank. Hopefully some day people with low vision will be able to thread a needle wearing this device! 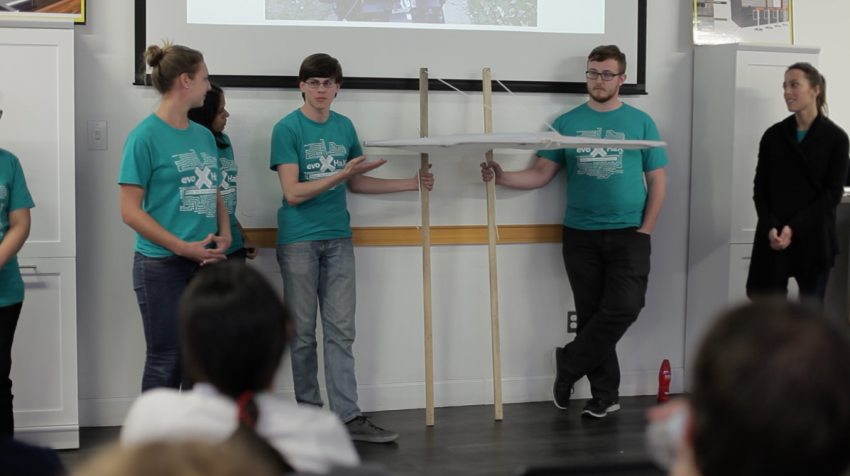 The first place team, Drexel Dragons, was the surprise curve ball. Wearable tech what??? This team was matched with a little girl with Cerebral Palsy who is in a wheelchair the majority of the time. She relies on a special screen system called Tobii which uses eye tracking to deliver her feelings throughout the day. Unfortunately in sunny conditions this does not work, plus it is just downright hot. So, the team set to work using the simple tools of engineering like hammer and nails to create a canopy. The canvas on wood frame works like a cantilever and can be folded to take up less room when it is off the chair. Obviously this is a simple prototype, but it beats the $600 version already on the marketplace. My favorite moment during the hackathon was when I asked the little girl what she thought about the device. Her answer—”Happy!”, and the room went wild. This team won because they were passionate about the family they had matched with. They were bonded and nothing was going to stop them from creating exactly what was wanted. Sometimes it’s the low tech hacks that are the ones most needed, and that is why I always remind people that there is a place for everyone at a hackathon. Congrats to Drexel Dragons for stealing my heart. To all the rest of the teams, you were amazing and I was so lucky to meet you all this weekend. Keep doing the good hacks! A special shoutout to Ather Sharif of EvoXLabs and his team of volunteers, especially Drew Vitek and Seth Fields for awesome photos. Hopefully I’ve encouraged a whole new group of hackers for next year. Hey teams, don’t forget to bring a Trinket 5V microcontroller, because ultrasonic sensors love ’em! 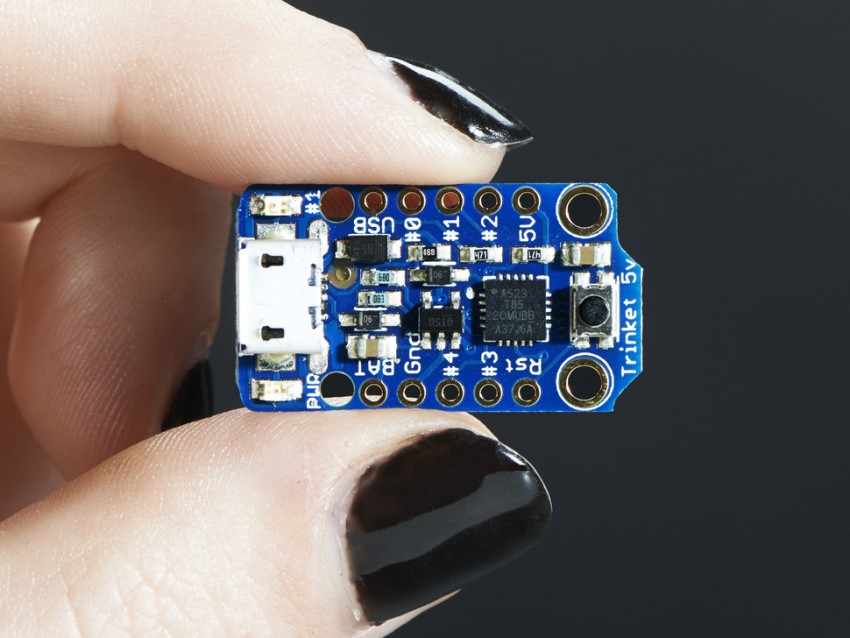