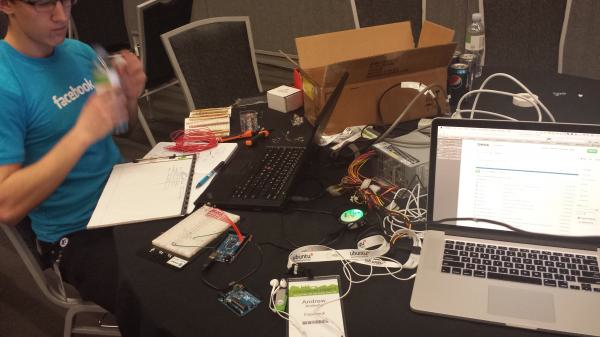 This a cross post from the Open Compute Project official blog

Our second blog post about the OCP Summit’s hardware hackathon comes from Derek Jouppi and Andrew Andrade who are interns at Facebook and won the OCP Summit Hackathon with a new design for the Open Rack V2’s Battery Backup Unit.

Derek and I decided to take part in the hardware hackathon at the Open Compute Summit on a whim. We’d heard about the hackathon and were intrigued enough to stop by, but didn’t plan on joining in. Once we were there, however, we realized that the opportunity was too much to pass up, and we jumped in without the team size and equipment that many other groups had.

We didn’t come with a team, or had years of experience. We have something better: an idea and killer execution.

We wanted to build something that was highly impactful, that could be contributed immediately to Open Compute, and that we hoped would be a shippable prototype within 24 hours. Given our criteria, we decided we wanted to do a hack for the newly released Battery Backup Unit (BBU) on the Open Rack V2 design, since this is the area that Derek was most familiar with.

The problem with the BBU is that if it is not functional, debugging a failed unit is extremely difficult and time consuming. You have to use a nest of wires, probes, DMM, and/or oscilloscope to find the solution – and it’s definitely not a great solution. Instead, we envisioned a coupler that would take in the output from the scope, process the signals and intelligently display what the error was. Using a simple ATMEGA microcontroller, and LED display and a few other components, we could make a compact and intelligent tool for technicians working in data centers. It was simple enough we could design and build a working prototype in only 24 hours, and yet it had high impact as it could directly contribute to running a better data center. It seemed like a perfect project for our two-man team.

Thanks to one of the hackathon’s organizers, John Kenevey, we were able to run back to Menlo Park to grab the supplies we needed: two Arduinos, bread breadboards, LED’s, wires, DMM, and an assortment of other parts we thought might be useful.