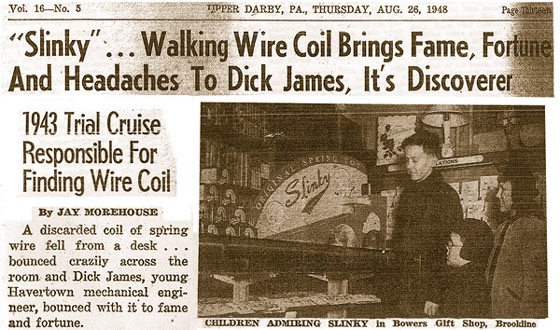 300 million Slinkys have been sold since in the last 70 years @ – The New York Times.

The Slinky, which first appeared in the Gimbels department store in Philadelphia 70 years ago this month, didn’t start out as a toy. More than 300 million Slinkys have been sold since its appearance 70 years ago. A mechanical engineer at a shipyard in Philadelphia, Richard James, was trying to come up with an anti-vibration device for ship instruments.

Richard and Betty James created one of America’s most recognizable and enduring toys: the Slinky. More than 250 million Slinkys have been sold, or one for every person in the United States. The Slinky has been sold in all of the continents worldwide, except Antarctica, and the catchy jingle that sold the toy since 1962 is one of the most familiar on television. In addition to its role as a toy, Slinky also has been used for such diverse purposes as therapeutic devices, makeshift antennas, drapery holders, and mail holders. Created by accident when Richard James saw a torsion spring fall on the deck of a ship and fall down some stairs, the Slinky got its moniker when his wife Betty saw the word in the dictionary, which means stealthy, sleek, and sinuous in Swedish. The company they founded, James Industries, developed several other Slinky toys after the original came out, including the Slinky dog, as well as other basic children’s toys. After Richard James left in 1960 for Bolivia to join a religious sect/cult, Betty ran James Industries for nearly 40 years as president and CEO, until the company was sold in 1998 to the Michigan-based POOF Products, Inc.

Ok, that’s news to us, didn’t know the history of SLINKY, now we do. SLINKY also went to space.