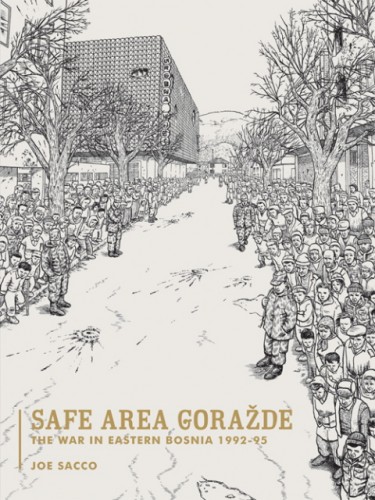 History’s a strange thing. When you’re inside of it, it’s difficult to parse. Something like Syria needs to be placed along so many historical vectors it takes a long form essay just to scratch the surface.

In the summer of 1995 we were all trying to figure out how to talk about the Bosnian War, trying to wrap our heads around atrocities committed by the Serb armed forces. Atrocities like ethnic cleansing and mass rape. What mass forces of history could have led a country to that point?

In that same summer, in a backyard in Berkeley, California, where we’re chatting and making merry and doing Berkeley things, I get to talking to this guy. He had an accent that I just couldn’t place. Once it seems like we’re comfortable with each other I ask where he’s from. 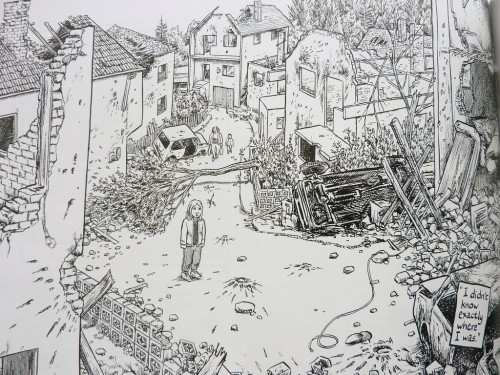 Joe Sacco’s work as a journalist involves going to places, meeting people, and telling stories about the people he’d met. He seems to be telling us that history isn’t just about these grand, invisible forces — history is about people.

His epic piece of journalism about the Bosnian War, Safe Area Goradže, takes a tragic set-piece of the post-Cold War period and makes it achingly intimate. 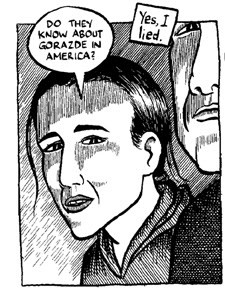 Before the breakup of Yugoslavia Goradže was a little industrial town on the river Drina. Over the course of the war the town had been evacuated, scavenged by surrounding townsfolk, bombed, and by 1995, made into a “safe” enclave by NATO.

The population almost tripled, fed by towns in the surrounding area that had been driven out by Serbian forces. Those forces surrounded Goradže. The only supply line came from the East, along the “Blue Road,” made so by the color of UN troops and supply trucks.

Sacco unravels the Bosnia War in an elegant and clear way that anybody can understand. That’s worth the price of admission.

But it’s the human moments that bring the piece together. Slowly learning the story of Edin, Sacco’s guide and host. The exultation at receiving a parcel of Levi’s 501s. And memorably, the bittersweet relationship between the people in Goradže and Drina cigarettes, the “national smoke.” 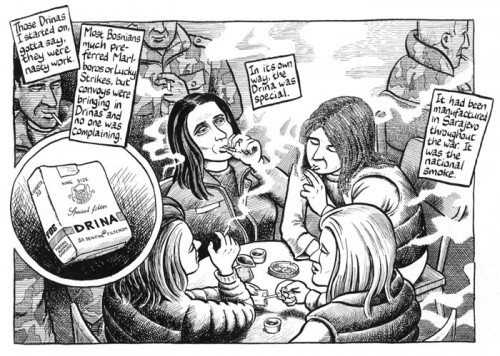 I got to be friends with the guy in the backyard in Berkeley. He wasn’t the enemy, and he’d had no part in the Serbian military’s ethnic warfare. He’d left in protest, fear, and disgust. Meeting him did the same thing Safe Area Goradže does: put a face on history.