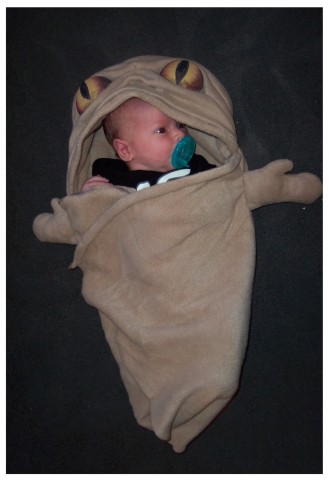 Do you know that Jabba the Hutt has a son? Rotta the Huttlet was introduced in the Star Wars: The Clone Wars feature film. He was at the center of the plot, and the Jedi had to get involved to keep Rotta safe. Several years ago, Lori’s 4-year-old son convinced her she had to dress her newborn baby up for Halloween. He was going to be dressed as Captain Rex, and he thought the baby should be Rotta the Huttlet. Lori had the baby just before Halloween — on October 22 — and managed to put together the costume in just a few days. She used tan fleece and traced around her son to make a vague slug shape. Then:

I stuffed the arms with some stuffing material I had around the house. And the eyes I made from a pair of knee highs that I had in my dresser. I put a bit of stuffing in those, made them into little balls, and then painted them with some craft paint to look like Baby Stinky’s eyes.

I made all the wrinkles by just pinching the fabric and hot gluing it together (I love hot glue!).

The end result was adorable! 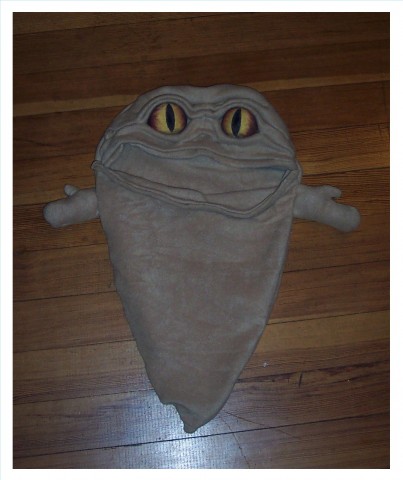 Comments Off on Rotta the Huttlet Costume