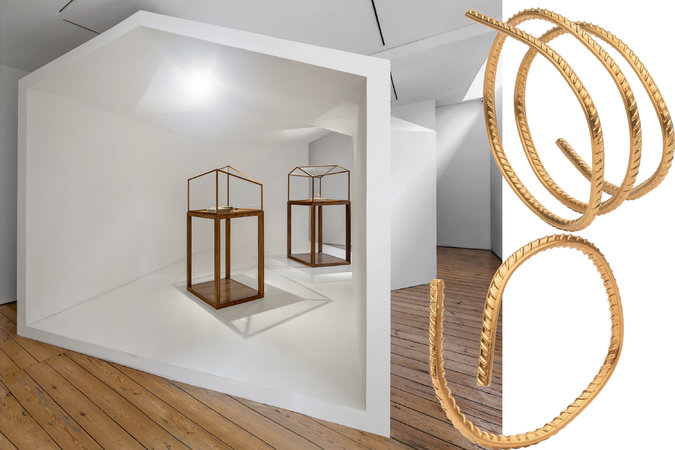 Ai Weiwei is not the type of artist you expect to work small. His most celebrated installations have been created on an epic scale: works made from 99 tons of steel, say, or 8 million sunflower seeds. So the news that the 58-year-old Chinese artist and activist has been secretly working on a collection of jewelry, which launched in London this week, might come as something of a surprise. Is he going in a new direction?

“Not in the least,” Weiwei laughed when T interviewed him in Berlin, where he is currently a visiting professor at the Berlin University of the Arts. “I have always loved jewelry — the history and aesthetic of it, the sense of past. We have been dressing ourselves with it since the Neolithic times, and that has always fascinated me. It’s our connection to that piece, what it says about us, what we feel about it — the story.”

Weiwei’s collection, “Rebar in Gold,” is available at Elisabetta Cipriani, a London gallery that for the past six years has specialized in creating “wearable art” with international artists including Giorgio Vigna, Jannis Kounellis and Ilya and Emilia Kabakov. Weiwei’s jewelry takes root from his investigation into the devastating 2008 Sichuan earthquake, which led to the death of 90,000 people, many of whom were children trapped under the metalwork of the badly constructed “tofu-dreg schools.” When he visited the site following the quake, he was so moved and outraged by the devastation that he collected 200 tons of contorted steel bars from the rubble. Back in his studio, Weiwei and his team straightened them and used them in his now-iconic artwork “Straight,” which showed at the 2013 Venice Biennale and is currently on view at the Royal Academy in London. (His human-rights and consciousness-raising work has won him awards and honors, but at a cost: over the past decade alone he has been brutally beaten, fined, placed under house arrest and imprisoned.)