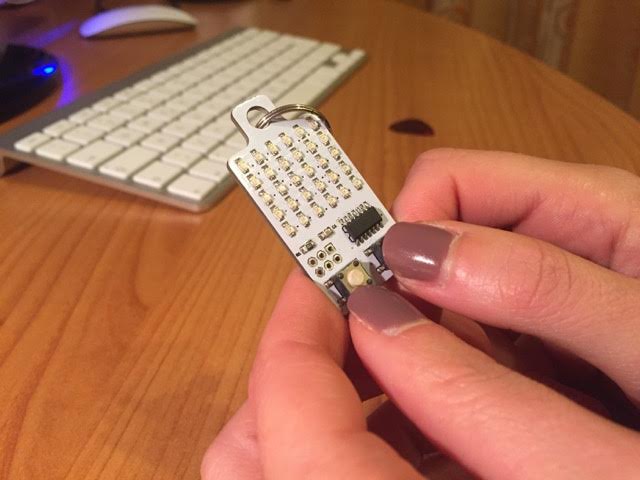 Okay, so it isn’t something that is stitched into your clothing, but it is a tiny gaming device on a keychain, which does make it wearable. This new project is from Alessandro Matera of Italy, the same maker that brought us the Tiny Watch—he obviously enjoys the challenge of working small. Here was the inspiration for KeyChainino:

A few months ago I was waiting for the bus and I realized that I was playing with my keys. So I had the idea to make something to play with in boring moments. Something simple. Just for relaxing. A tiny device to play with, but a non-standard device.

Alessandro definitely loves vintage games, so he decided to design his board using LEDs instead of an LCD. He used Charlieplexing to drive the 30 LEDs on an ATTiny84. He wanted to make it easy for people to design their own games without having to worry about how to design boards.

Actually the only open source part is the sketch, because I really want that people have the possibility to make their own games. Obviously they must have KeyChainino that can be purchased on my website. But I want to make another version of the keychain with through-hole components that may be used in soldering workshops. This version will be sold in kit.

One of the first games he designed for it was the classic Pong game, but he is also hoping to do a Flappy Bird version. Check out the action.

Alessandro continues to impress and you have to love the way he put “cool keychain” on the back of his board. If you want to start gaming on the small now, visit his KeyChainino site. If you prefer a larger playing space, you might want to look at our Pocket PiGRRL learning guide. It’s a Raspberry Pi version of a Gameboy that will fit in your pocket. This project can handle emulators for Atari, Nintendo, Gameboy, Sega and other brands. No previous Gameboy needed as you will be building something from scratch. Have fun with a DIY game of your own!