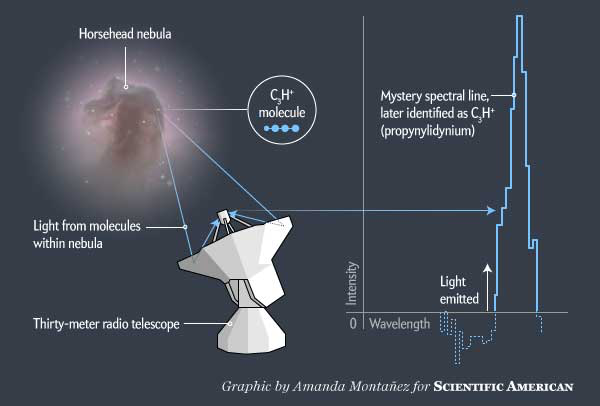 Something strange was hiding in the Horsehead. The nebula, named for its stallionlike silhouette, is a towering cloud of dust and gas 1,500 light-years from Earth where new stars are continually born. It is one of the most recognizable celestial objects, and scientists have studied it intensely. But in 2011 astronomers from the Institute of Millimeter Radioastronomy (IRAM) and elsewhere probed it again. With IRAM’s 30-meter telescope in the Spanish Sierra Nevada, they homed in on two portions of the horse’s mane in radio light. They weren’t interested in taking more pictures of the Horsehead; instead, they were after spectra—readings of the light broken down into their constituent wavelengths, which reveal the chemical makeup of the nebula. Displayed on screen, the data looked like blips on a heart monitor; each wiggle indicated that some molecule in the nebula had emitted light of a particular wavelength.

Every molecule in the universe makes its own characteristic wiggles based on the orientation of the protons, neutrons and electrons within it. Most of the wiggles in the Horsehead data were easily attributable to common chemicals such as carbon monoxide, formaldehyde and neutral carbon. But there was also a small, unidentified line at 89.957 gigahertz. This was a mystery—a molecule completely unknown to science.