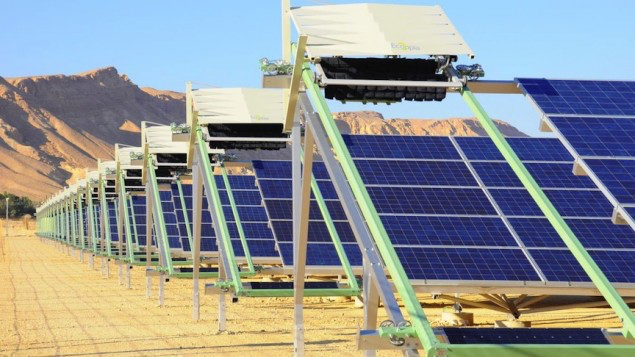 Like the new site, most solar energy farms are located in deserts, where there is plenty of sunlight — which solar panels, of course, need a lot of. But the desert also has a lot of dust, which clogs up the photovoltaic components of the panels, making them less effective in collecting sunlight for conversion into energy. Panels have to be cleaned on a regular basis, but water in the desert tends to be expensive, if available at all — and the use of water to clean the panels raises the costs of production, making solar power too expensive to be considered anything more than a novelty.

If the world hopes to reduce its use of fossil fuels, as the Paris agreement requires, solar has to become less expensive — and Ecoppia’s technology can do that. Instead of using water to clean panels, Ecoppia’s robot cleaners are equipped with microfibers, with each robot assigned to a row of PV panels. Using controlled air flow, the robots push the accumulated dirt off panels, as they glide along the surface of panels on their polyurethane-coated aluminum frame using wheels.

Each robot can cover about 100 square feet of panel each minute, saving not only water, but time. The robots are controlled by a central cloud-based control panel, and can operate in tandem (starting and finishing at the same time) or autonomously, based on the instructions given by park staff.