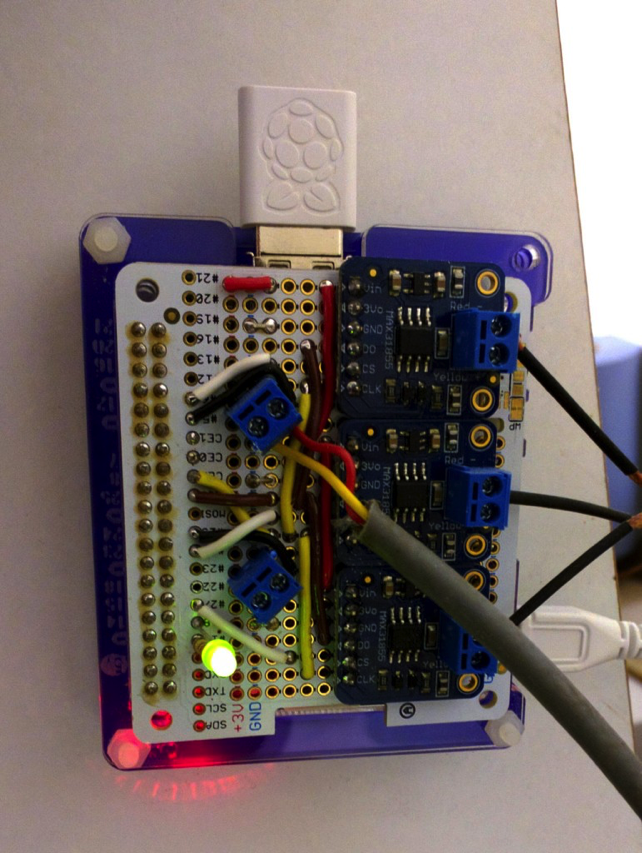 So as well as technology, I love baking – to the extent that I bake stuff to sell with all the shenanigans that goes with that. Local authority inspections, food hygiene certificates, insurance, blah….

So that’s an A+ model in a nice Pimoroni case with an Adafruit perma proto-plate on-top with some “stuff” to control the oven stuck on the side of the oven with some Blu-Tack for now. It’s powered up – stays online all the time now (I had issues with an old Wi-Fi dongle, replaced it with one of the Foundation approved ones and it’s been rock-solid since then). The three thin cables go to thermocouples inside the oven compartment and the grey cable goes to a SSR (Solid State Relay) inside the top of the oven. The Green LED is actually a bi-colour LED wired across 2 GPIO pins with a resistor. It can be off, green, red or if I could be bothered to write code to alternate the pins, a sort of muddy yellow. I just use it to indicate the heater being on (red) or off (green).

So how do you control an oven? Lets break it down into steps. One thing I was interested in was just how rubbish my oven really was. I already knew where the hot spots were (the bottom of the oven is hotter than the top – who’d have thought that?) and how unevenly it cooked as well as just how approximate the temperature dial was (plus or minus a fruit cake) so the first task was to measure the temperatures. Most of the temperature sensors you see people plugging into the Pi are only good to about 120°C or thereabouts. I wanted something that was good to 300°C or more. (This oven maxes out at 250, but I have others that go to 300…)