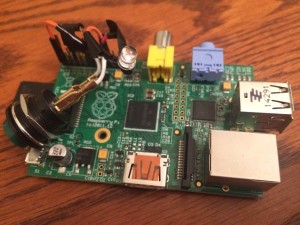 Following up on my last post about making a Huzzah ESP8266 door trigger for my mother, I wanted to share another project I recently made for her.  Most of my ideas about the possibilities for using microcontrollers and automation around the home come from doing things that will benefit my disabled mother.  There are many people around the world with a loved one struggling with some form of disability and because disabilities are all unique, hacking for individual preferences is such a powerful means for changing lives.  With every project I make I hope to help my mother in some small way and make her life easier, but I am also learning new things along the way.

As such, my most recent project was an audiobook player based on a tutorial found here.  With certain neurological diseases it becomes very difficult for people like my mother to hold things steadily, which can make something as simple as reading into an impossible task.  She often finds out about books she is interested in but cannot read on her own, while also struggling to use most forms of technology that people would typically use to listen to an audiobook.  After searching around for a bit I found this Raspberry Pi project that was perfect and easy enough to make while learning a lot of new things.

The post is a little bit older and uses a Model B Pi, which is what I used as well, but that doesn’t matter much.  The details were easy to follow and there were only two areas that I struggled in, but ultimately it helped me understand the Pi more.  The first issue was setting up the wiring for the LED and the button.  I tried to recreate the wiring in the picture from the site, but it wouldn’t function and ultimately I couldn’t figure out what I had done wrong.  This really taught me the importance of prototyping and using a breadboard first because once I rewired it using a cobbler everything lit up and did what I expected.  Once I knew it worked I scrapped the idea of using a GPIO cable and put the whole thing together with jumper wires directly onto the Pi’s access pins.  I still don’t know what exactly went wrong, but that doesn’t matter much because using jumper wires was very easy and made it clear to me which pin I was using. 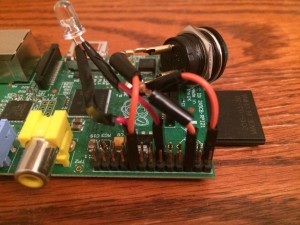 The other area I struggled with was in using the code provided to play the audio on startup.  I had never used crontab before and really didn’t know what it was, so I had to first learn a bit about that by asking some of my coworkers here.  There are lots of sites that have great information about using the crontab, but beyond learning that it is for scheduling tasks I didn’t really get how to write to it at first.  Turned out to be as simple as typing in the scheduled task to occur at reboot then quitting to save.  I’m not sure if this is something that other people have struggled with, but it held me up a little.  Beyond that the code is good and the only change I made to it was removing the later portions that controlled rewind since I didn’t think that would be of much use.

I only have one thing left to do and that is to create a case for my project.  I plan on making a small wooden box for it to go in and drilling holes for the LED and button.  When it comes time to give this to my mother next week I will have a small library of audiobooks for her on USB drives and something new to help her do something she likes.  This ended up being a fairly straightforward project to make and I know it will be put to good use.  If there is anyone looking for an afternoon project that will help out someone else who struggles with holding their hands steady, I highly recommend this audiobook player.