Ada Lovelace: why do we care? #WomenInSTEM @lynrobinson 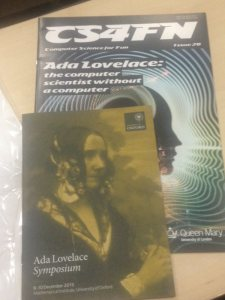 Nice post from Dr. Lyn Robinson from her blog thelynxiblog

As at least an honorary member of the computer science discipline, I have always been quick to cite Ada as an example of ‘a really clever girl’, someone who represents equality for women in what is still, in many universities, a male dominated subject.

I held the impression that Ada was rather more clever than those who influenced her, but apart from the well told, but often disputed, line that she was the world’s first ‘programmer’, I knew little about her, and hence my desire to join an audience of mathematicians, physicists and computer scientists for a couple of days of hardcore Ada.

The sessions certainly brought Ada to life for me, allowing me to move beyond my association of her with the workings of the Analytical Engine, and with her somewhat severe photographs.

As I listened to the presentations around findings from computer science, music and literary analysis, I was reminded of the contribution which library and information science (LIS) makes to progress within other disciplines: from promoting the value of original sources, through the creation of collections and discovery systems, to the question of archiving, in which the selection, preservation, and provision of access to the documents comprising our heritage has important implications for our future.

Several speakers drew on the connection between Ada and imagination, and her understanding of its central role in the process of discovery within both the arts and sciences. As LIS professionals, we could perhaps draw more attention to ways in which our knowledge and skills can be used to stimulate imagination, and to support creativity, connections and new understanding.

Ursula Martin described materials selected (with Mary Clapinson) from the archives of the Lovelace family papers, in building the current exhibition at the Bodleian. [A digital collection of Ada’s mathematical papers will be available online in 2016]. The papers, having spawned much overlapping analysis of Ada already, promise there is still much to be discovered, and the delight shown by Martin, a computer scientist, in realising the meaning of scribbled diagrams sketched across snippets of paper was infectious. The documents she described revealed Ada’s wide ranging scientific interests and abilities, including her fascination with ‘magic squares’, an example of which was deftly demonstrated in modern time by Soren Riis (really seems like magic!).

The correspondence between Ada and her tutor, August de Morgan, and between her and Charles Babbage, provide us with rich sources of evidence for the development of Ada’s thinking, in support of the claim as to whether or not she was the world’s first programmer. It is worth considering perhaps, the longevity and accessibility of contemporary emails as evidence for future historians. Much development of modern thinking takes place in digital forums and on multiple social media and publishing platforms. This is likely to prove challenging to any attempt to reconstruct accurate trails of the emergence of ideas, which in today’s world often involve multiple players, in contrast to the one-to-one conversations of the analogue past. An important question for library and information science, is not just ‘what to preserve?’ but how to know it even exists.

Comments Off on Ada Lovelace: why do we care? #WomenInSTEM @lynrobinson