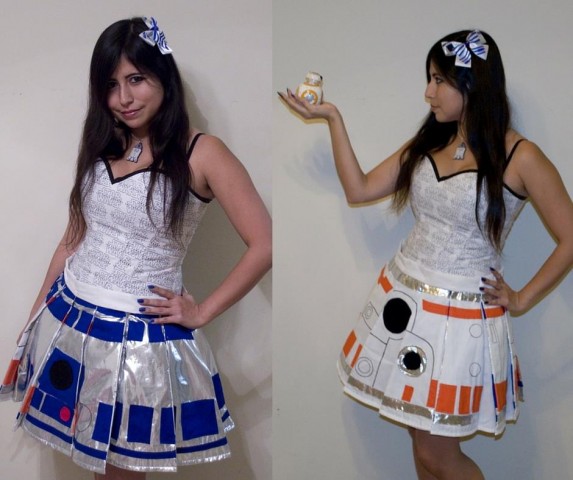 The ball droid BB-8 was introduced in Star Wars: The Force Awakens. The cute astromech stole the hearts of many fans from his first appearance in the teaser released in November 2014, but the adorableness of BB-8 doesn’t mean you should forget about R2-D2. Both droids have parts in the film — R2-D2 is one of the few characters to be in all the Star Wars movies so far — and one half of the cosplay duo known as Lemon Drop crafted a dress to celebrate both astromechs. Her transforming skirt depicts both R2-D2 and BB-8 at the same time – it just takes a little twist to show off a different look.

Pleats are the trick to making the illusion work. The maker said “The skirt portion is made up of several dozen individual panels stitched together. As for the changing part, well, we’ll attribute that to The Force.”

Comments Off on Transforming BB-8 and R2-D2 Dress