This year’s culture crawl was a rousing success! Thanks to everyone who came, not least the food, alcohol, and film crews. But more about that in another post to come shortly.

I procrastinate terribly, which is why most of these projects exist — by working on these I’m usually avoiding something else. The last sprint leading up to the culture crawl became its own target for procrastination, so I wandered into a thrift store and got one of these… 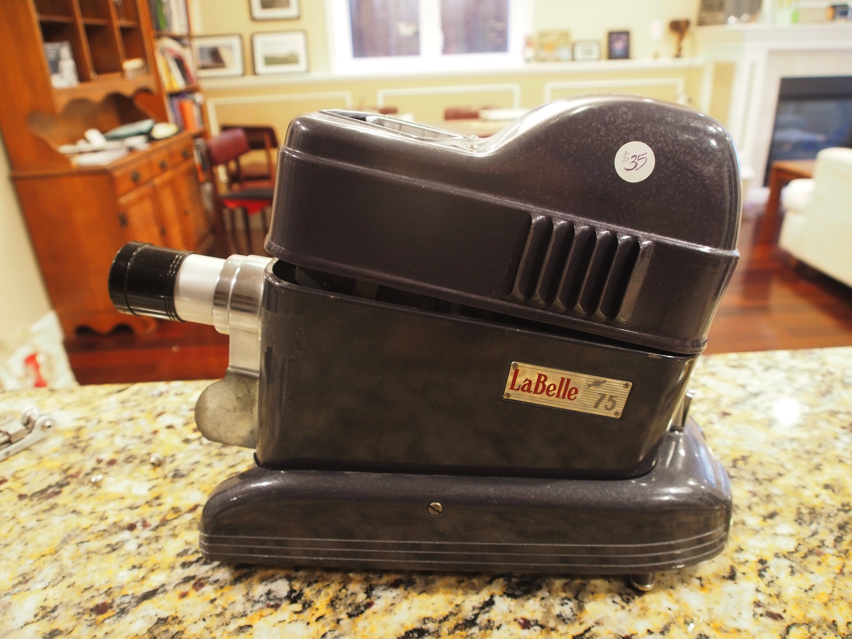 …It’s a LaBelle 75 slide projector, made in Oconomowoc, Wisconsin. Googling around turns up a lot of thrift store listings but nothing much about the company — beyond the fact that they may still exist, making LED signage. Or it might be someone else who took up the name.

So obviously I wanted to make it into a working video projector. People have made DIY projectors ever since LCD displays became available; the normal way to do it is to separate the built-in backlight from the LCD itself, which is transparent, and use a high-power light source instead. I’ve done this before, as documented back on the old Free Geek Vancouver Volunteer Blog. It worked — once — then a friend put a couch on top of it. (Hi, Andrew.)

The Achilles’ heel for this technique is heat. A projector bulb generates a lot of heat, and LCDs don’t like variations in temperature. The brighter the light, and the smaller the LCD, the worse it gets.

In recent years we’ve gained a very good solution: high-power LEDs. These are stunningly efficient, meaning low power and less heat — but another less obvious improvement is that they really only output light on the visible spectrum. Other kinds of projector bulbs typically output light all over the spectrum, which the LCD absorbs and has to dissipate as heat.

So instead of a 500W bulb you can throw a 10W LED in, mounted on a modest heat-sink, and basically forget that heat was ever a problem. A 10W LED isn’t going to give anyone a tan, but it’s bright enough for my purposes. I could’ve probably worked with a 20W LED just as easily, but none were in stock locally.

I decided to work with the optics of the slide projector as unmodified as possible, and the existing physical limits of the slide mount were roughly 45x45mm, so I opted for an Adafruit 2.2″ LCD. This is similar to the OLEDs I used for the Viewmaster Video — it’s supported by the same set of Linux kernel drivers — so it was an easy choice. The aspect ratio is not preserved because the whole display doesn’t fit exactly in the frame; it’s more like a traditional 4:3 aspect ratio.

I stripped out the old electrics from the projector, Dremelled out a hole for mounting the LCD, and otherwise got to it. 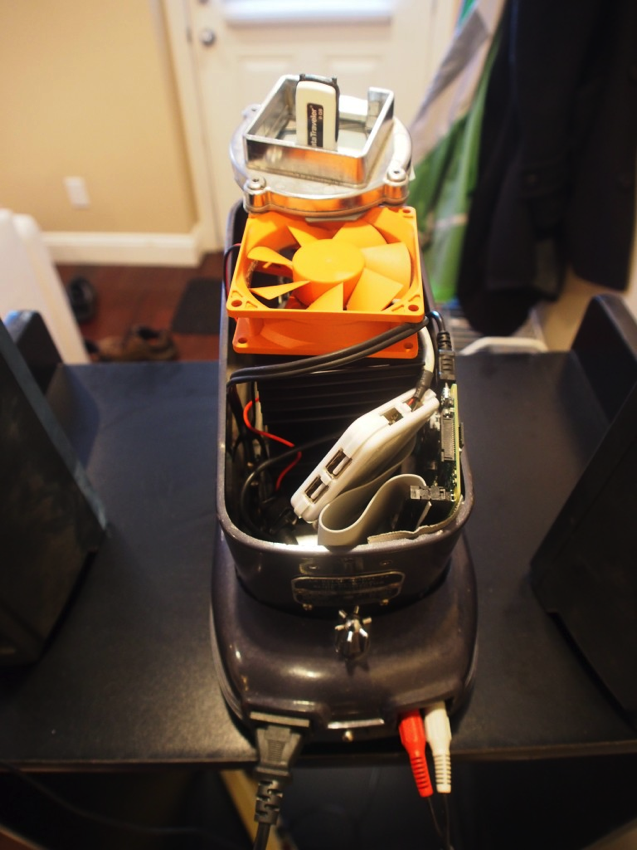 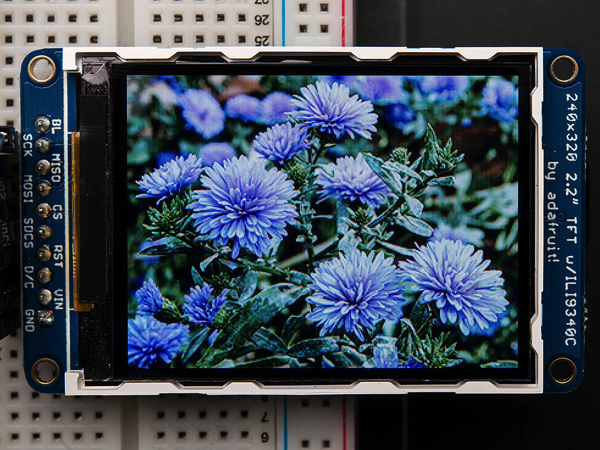 2.2″ 18-bit color TFT LCD display with microSD card breakout – ILI9340: This lovely little display breakout is the best way to add a small, colorful and bright display to any project. Since the display uses 4-wire SPI to communicate and has its own pixel-addressable frame buffer, it can be used with every kind of microcontroller. Even a very small one with low memory and few pins available! Read more.