Garret Augustus Morgan, Sr. was an early 20th Century inventor, whose inventions had immediate, positive impacts on society. He was also a founder of the Cleveland Association of Colored Men, which worked to better the conditions of the local black community. His two most notable inventions were a gas mask and a 3 signal traffic light, used to regulate road systems that were dealing with accommodating the nation’s first automobiles.

He accomplished all of this with only a 6th grade education.

Check out this great profile of him from the Who Made America? series from PBS: 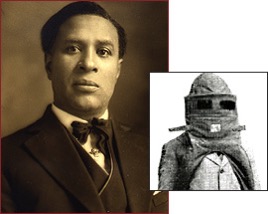 Morgan’s biggest venture was his safety hood. As a young man, he had seen firefighters struggling to withstand the suffocating smoke they encountered in the line of duty. In 1914 Morgan secured a patent for his device, a canvas hood with two tubes. Part of the device held on the back filtered smoke outward, while cooling the air inside. Morgan’s safety hood won accolades and wide adoption in the North, where over 500 cities bought it, over time. He sold the hoods to the U.S. Navy, and the Army used them in World War I. But sales in the segregated South proved challenging. Morgan’s hood got great press in 1916, when he used it to save workers in a collapsed tunnel under Lake Erie. But Cleveland’s newspapers and city officials wrote Morgan — who had ventured into the tunnel first — out of the story, lauding other men and ignoring Morgan’s heroism. It would take years for the city to recognize his contributions. Morgan died in 1963, vindicated as a hero of the Lake Erie rescue and restored to his place in history.