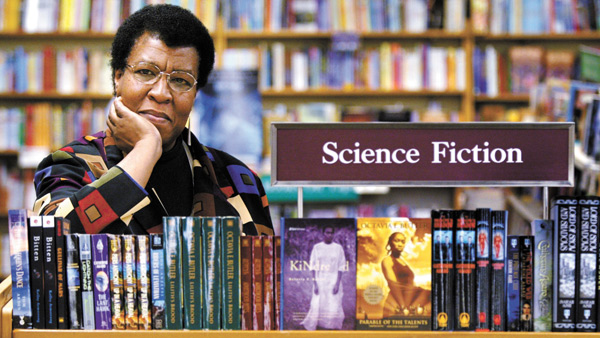 Octavia Butler is one the greatest Science Fiction writers of the 20th Century. She was awarded MacArthur Grant and won every major award for Science Fiction in the field.

She took full advantage of the speculative freedom that the genre allows writers to explore her interest in sociology, biology, race relations, American history, and the future of humanity. She was a pioneer in bringing black people into the imagined future that is the most common focus of science fiction, and in telling the story of that future in the voices of black women.

[Her successful and influential novel Kindred] tells the story of a young black woman in 1976 who keeps getting pulled back in time to the early nineteenth century in Maryland, where she repeatedly has to save the life of a white slave-owning ancestor. The appeal of this book, Butler’s most successful novel, which is taught in high schools and colleges, stretches far beyond the usual science fiction audience. Originally published in 1979, it was reissued in 1988 and in a special twenty-fifth anniversary edition in 2004.

Check out her article “A Few Rules for Predicting the Future” from Essence Magazine.