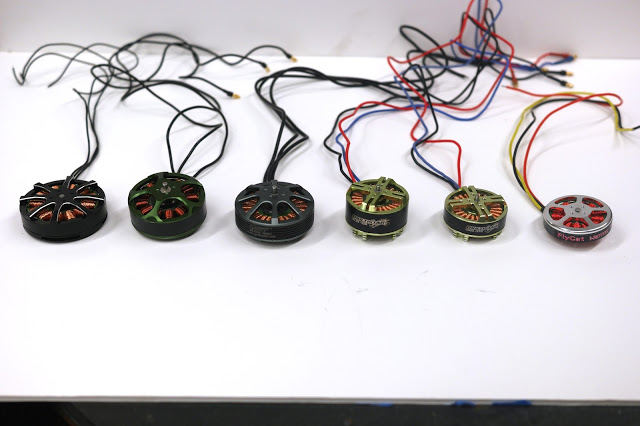 Bear with me, this is going to be a long one.

I characterize a bunch of cheap brushless motors to investigate their usefulness in small running robots. Each motor gets a mechanical teardown and brief characterization. Scroll to the bottom for conclusions.

I’ve worked on small running robots in the past, in the Biomimetic Robotics Lab. That robot was designed to be extremely low-cost, built out of super cheap off-the-shelf DC gearmotors, which proved to be a hugely limiting factor in terms of the kind of running the robot was capable of.

So here’s the basic idea: The hobby remote-control-things market has produced an abundance of cheap, light, super powerful motors. This type of motor has showed up in my fleet of small electric vehicles, and many other people’s vehicles, multi-copters, airplanes, etc. long before me. But not in robots as precision or fast, torque controlled actuators.

There are a couple reasons for this, I think. First, suitable motor controllers don’t really exist. There are super expensive small brushless controllers made by companies like Maxon, and slightly less expensive (but larger) industrial-grade servo drives by the likes of AMC. These could be convinced to work by appending your own sensor array to a hobby motor. However, these motors tend to be hot-wound (i.e. low torque constant, low resistance, low inductance), so they want lots of amps and relatively few volts, which doesn’t play nicely with the fancy servo drives. On the other end of the spectrum, there are the hobby grade controllers which usually are awful for anything other than RC vehicles, as they lack any form of current or torque control.

As I’m interested in using these motors in dynamic running robots, all these motor control options become even less useful. The fancy industrial drives might output 10 amps all day, but won’t give you a drop more than 10 amps ever. For running, on the other hand, that’s not what you want. Instead, you want many times your continuous current for short bursts and much less current the rest of the time. So more dynamic current limiting is required.

Thanks to Nick’s last semester at MIT working on the Derpbike (a.k.a Bremsthesis), I’m making this a senior thesis project. While I technically don’t need to do one to graduate as I’m doing course 2A (the flexible MechE option), it’s an excellent excuse to spend all of next term at MITERS working on my own project for credit. My end-goal for the semester is to get all the necessary motor control stuff worked out and build a prototype 2 degree-of-freedom leg using hobby RC motors.

I’ve started out this project by acquiring a pile of small brushless motors I thought would be suitable for this kind or robot, and characterizing them to figure out which are the best. These were visually narrowed down from the vast array of available motors by geometry. In general, pancake-shaped (large diameter, small depth) is best for high torque density1.

This can be seen with a little motor dimensional analysis. Assume your rotor and stator are two rings of constant thickness, and radius and depth can be varied (not too unreasonable, although not all-encompassing). Motor torque will be proportional to both air gap surface area and air gap radius. So for a fixed air gap surface area (which means fixed mass, in this case) increasing diameter means increasing torque per mass.

Obviously there are many practical reasons why this might not be perfectly true (motor supporting material mass may scale differently, thinner motor means larger percent of windings in the end turns, etc.) but it’s a good place to start from.

Comments Off on Motor Characterization for Small Running Robots #robotics