A sea of robots #robotics

Thanks to Miguel for sending in this blog tip! Via biomachines lab

A team of researchers from the Institute of Telecommunications at University Institute of Lisbon and from University of Lisbon in Portugal are the first to demonstrate a swarm of intelligent aquatic surface robots in a real-world environment. Swarms of robots have the potential to scale to hundreds or thousands of robots and cover large areas, making them ideal for tasks such as environmental monitoring, search and rescue, and maritime surveillance.

“Swarm robotics is a paradigm shift: we rely on many small, simple and inexpensive robots, instead of a single or a few large, complex and expensive robots”, said Dr. Anders Christensen, the principal investigator in the project. The team is focused on the challenge of how to control such large groups of robots autonomously. “Controlling a large-scale swarm of robots cannot be done centrally. Each robot must decide for itself how to carry out the mission, and coordinate with its neighbors”.

The researchers resorted to nature-inspired approaches for designing their robotic swarm. Instead of manually programming the robots to carry out a mission, evolutionary algorithms are used to synthesize the controller of each robot. Evolutionary algorithms mimic Darwinian evolution to automatically generate the artificial intelligence that controls each robot. “The robots basically learn how to cooperate with each other by themselves”. Each robot is controlled by an artificial neural network, an “artificial brain” that allows the robots to carry out the missions autonomously, without a human operator or a central control station. The team demonstrated the capabilities of a swarm with up to ten robots in various collective tasks, including area monitoring, navigation to waypoint, aggregation, and dispersion.

The robotic platform was built by the team using digital fabrication techniques and widely available components, in order for the robots to be inexpensive. Each robot costs only €300 in materials. The hull of the robots is built from CNC-machined polystyrene foam, and fitted with 3D-printed components. Each robot is equipped with GPS and compass, it can communicate with neighboring robots using Wi-Fi, and the artificial brain is run on an onboard Raspberry Pi 2 computer. The team is now working on developing the second generation of their aquatic robots, which will be equipped with more advanced sensors and be able to carry out long-term missions at sea. Swarms of aquatic robots have the potential to replace expensive manned vessels and to put the crew out of danger in many maritime missions. 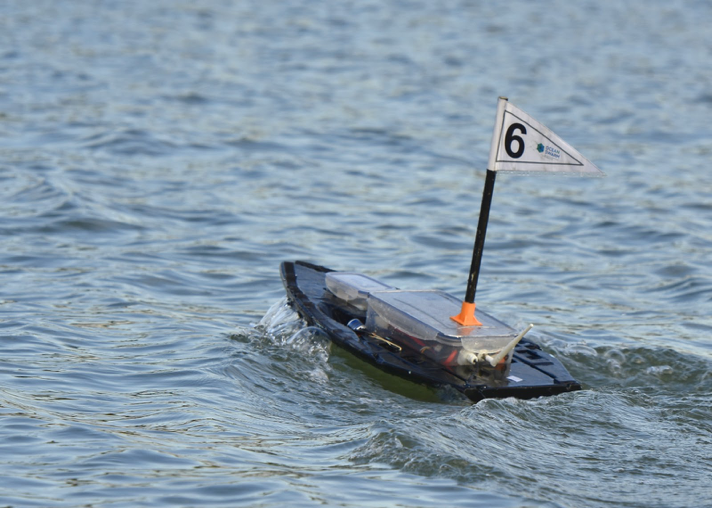 Comments Off on A sea of robots #robotics