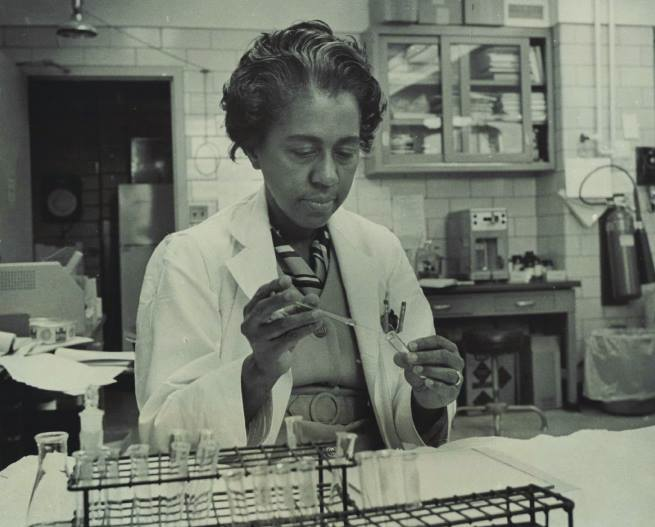 Marie Maynard Daly was the first Black American woman in the US to get a Ph.D. in chemistry. From wikipedia:

Daly worked as a physical science instructor at Howard University from 1947 to 1948 while simultaneously conducting research under the direction of Herman R. Branson. After being awarded an American Cancer Society grant to support her postdoctoral research, she joined Dr. A. E. Mirsky at the Rockefeller Institute, where they studied the cell nucleus. While at the Rockefeller Institute, Daly studied the nuclei of tissues to determine the base compositions of the deoxypentose nucleic acids present. Additionally she explored the role of cytoplasmic ribonucleoprotein in protein synthesis. Using labeled glycine, she was able to see how protein metabolism changed under feeding and fasting conditions in mice. This allowed her to monitor the activity of the cytoplasm as the labeled glycine was taken up into the cell nucleus. In 1953, after Watson and Crick described the structure of DNA, Daly’s world changed significantly: suddenly, the cell nucleus research field was flooded with funding opportunities. Her work flourished in the new environment.

Daly began working in the College of Physicians and Surgeons at Columbia University in 1955. In collaboration with Quentin B. Deming, she studied the effects that aging, hypertension and atherosclerosis had on the metabolism of arterial wall. She continued this work as an assistant professor of biochemistry and medicine in the Albert Einstein College of Medicine at Yeshiva University where she and Deming moved in 1960. She enjoyed teaching medical students and was dedicated to increasing the number of minority students enrolled in medical schools. In 1971 she was promoted to associate professor.

Daly also served as an investigator for the American Heart Association; she was especially interested in how hypertension affects the circulatory system. She was a member of the prestigious board of governors of the New York Academy of Sciences for two years. Additional fellowships that Daly received throughout her career include the American Cancer Society, American Association for the Advancement of Science, New York Academy of Sciences, and Council on Arteriosclerosis of the American Heart Association. She was designated as a career scientist by the Health Research Council of the City of New York. Daly retired from the Einstein College of Medicine in 1986, and in 1988 she established a scholarship for African American chemistry and physics majors at Queens College in memory of her father.