Samuel Delany is one of the most revered Science Fiction writers of our time, as well as a critic and academic. Known for his experimental themes and for subverting conventions, he’s published over 20 novels plus many short stories and pieces of criticism. We recommend checking out this great interview he did with That Paris Review (excerpt below) as well as his work. 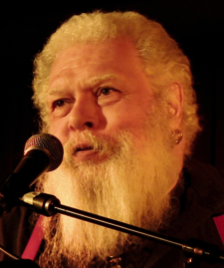 Delany was born on April 1, 1942, in Harlem, by then the cultural epicenter of black America. His father, who had come to New York from Raleigh, North Carolina, ran Levy and Delany, a funeral home to which Langston Hughes refers in his stories about the neighborhood. Delany grew up above his father’s business. During the day he attended Dalton, an elite and primarily white prep school on the Upper East Side; at home, his mother, a senior clerk at the New York Public Library’s Countee Cullen branch, on 125th Street, nurtured his exceptional intelligence and kaleidoscopic interests. He sang in the choir at St. Philip’s, Harlem’s black Episcopalian church, composed atonal music, played multiple instruments, and choreographed dances at the General Grant Community Center. In 1956, he earned a spot at the Bronx High School of Science, where he would meet his future wife, the poet Marilyn Hacker.

In the early sixties, the newly married couple settled in the East Village. There, Delany wrote his first novel, The Jewels of Aptor. He was nineteen. Over the next six years, he published eight more science-fiction novels, among them the Nebula Award winners Babel-17 (1966) and The Einstein Intersection (1967). Even then, his exploration of issues of sexuality, ethnicity, and gender—like the polyamorous love between three spacecraft navigators in Babel-17, or alien colonization and the relationship between the marginalized and history in The Einstein Intersection— distinguished him from other authors working in the genre. Even when set in fantastic worlds, like the Star-Pit, a city that squats at the galaxy’s edge, or Nevèrÿon, an ancient, dragon-filled land whose inhabitants are just learning to write, Delany’s work mirrors the generational shifts and concerns of his times.