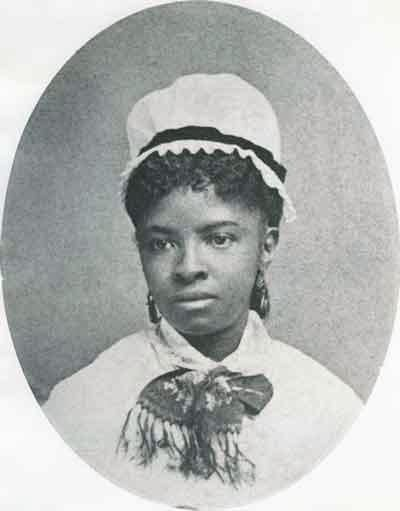 Rebecca Lee Crumpler was the first African-American woman to become a physician in the United States. From the National Library of Medicine:

Rebecca Lee Crumpler challenged the prejudice that prevented African Americans from pursuing careers in medicine to became the first African American woman in the United States to earn an M.D. degree, a distinction formerly credited to Rebecca Cole. Although little has survived to tell the story of Crumpler’s life, she has secured her place in the historical record with her book of medical advice for women and children, published in 1883.

Crumpler was born in 1831 in Delaware, to Absolum Davis and Matilda Webber. An aunt in Pennsylvania, who spent much of her time caring for sick neighbors and may have influenced her career choice, raised her. By 1852 she had moved to Charlestown, Massachusetts, where she worked as a nurse for the next eight years (because the first formal school for nursing only opened in 1873, she was able to perform such work without any formal training). In 1860, she was admitted to the New England Female Medical College. When she graduated in 1864, Crumpler was the first African American woman in the United States to earn an M.D. degree, and the only African American woman to graduate from the New England Female Medical College, which closed in 1873.

In her Book of Medical Discourses, published in 1883, she gives a brief summary of her career path: “It may be well to state here that, having been reared by a kind aunt in Pennsylvania, whose usefulness with the sick was continually sought, I early conceived a liking for, and sought every opportunity to relieve the sufferings of others. Later in life I devoted my time, when best I could, to nursing as a business, serving under different doctors for a period of eight years (from 1852 to 1860); most of the time at my adopted home in Charlestown, Middlesex County, Massachusetts. From these doctors I received letters commending me to the faculty of the New England Female Medical College, whence, four years afterward, I received the degree of doctress of medicine.”

Dr. Crumpler practiced in Boston for a short while before moving to Richmond, Virginia, after the Civil War ended in 1865. Richmond, she felt, would be “a proper field for real missionary work, and one that would present ample opportunities to become acquainted with the diseases of women and children. During my stay there nearly every hour was improved in that sphere of labor. The last quarter of the year 1866, I was enabled . . . to have access each day to a very large number of the indigent, and others of different classes, in a population of over 30,000 colored.” She joined other black physicians caring for freed slaves who would otherwise have had no access to medical care, working with the Freedmen’s Bureau, and missionary and community groups, even though black physicians experienced intense racism working in the postwar South.

“At the close of my services in that city,” she explained, “I returned to my former home, Boston, where I entered into the work with renewed vigor, practicing outside, and receiving children in the house for treatment; regardless, in a measure, of remuneration.” She lived on Joy Street on Beacon Hill, then a mostly black neighborhood. By 1880 she had moved to Hyde Park, Massachusetts, and was no longer in active practice. Her 1883 book is based on journal notes she kept during her years of medical practice.