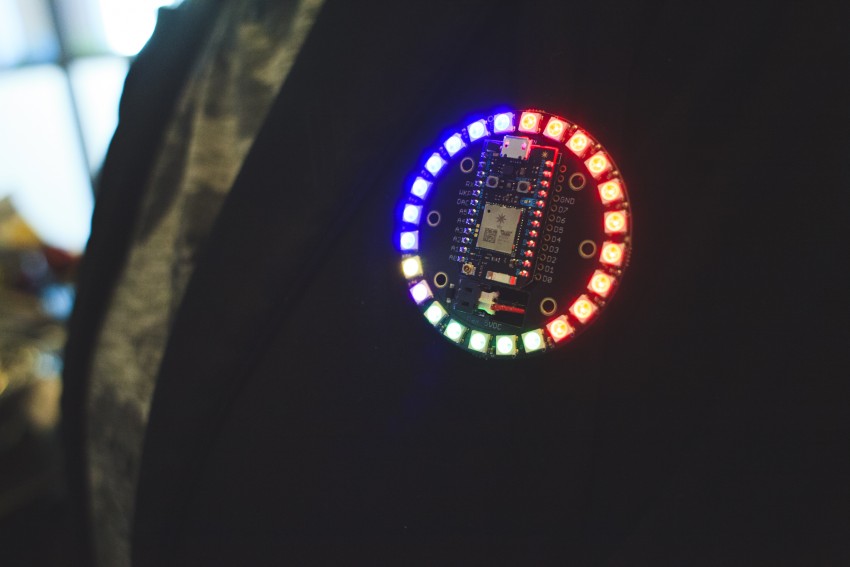 I was recently invited to collaborate on a project at IBM’s InterConnect conference in Las Vegas. Being that I was already fascinated with their Watson computer and I was already tinkering on an LED pin design, I decided to bring the two together. The idea was that the pin would analyze a Twitter stream though the Watson computer tone analyzer, and then output the different variables through colors on the pin, much like a classic donut chart. On the hardware end, I used a Particle Photon microcontroller with it’s matching Adafruit NeoPixel shield, which fits together like a beautiful sandwich. A small LiPo plugs into the front and is attached with velcro on the back side, right next to a magnetic pin back, making it easy to wear. 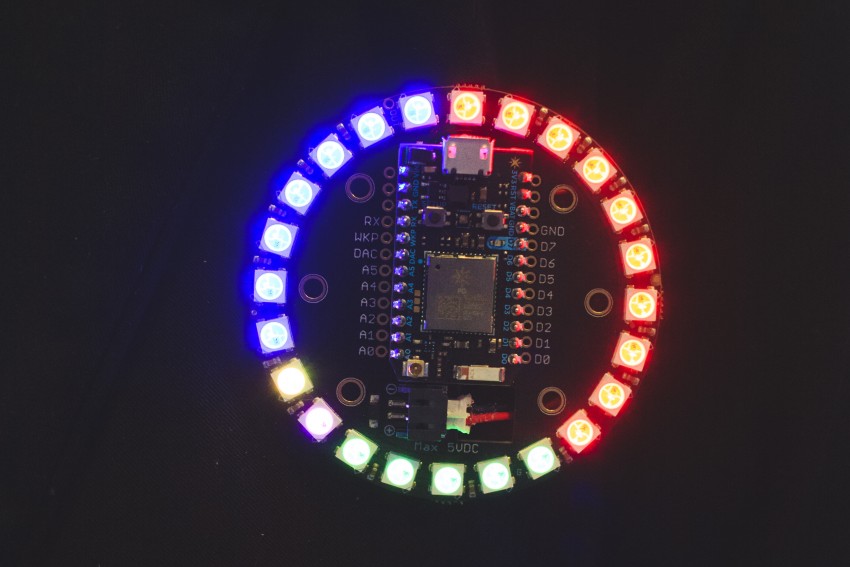 The hardware was challenging, only in that open source WiFi capable microcontrollers are still relatively new. So, things like teaching the controller to connect to a different WiFi or getting the most up-to-date libraries can be a little frustrating. However, that is just for the moment, and these new WiFi Arduino compatible controllers are stepping up their game. Besides, almost anything can be overcome with some good code, and that is where JeanCarl Bisson comes in. I asked to be matched to a developer with a good understanding of data crunching on the Watson side, and it just so happens that JeanCarl is a Blue Mix evangelist. He also happens to be a hackathoner and NASA enthusiast (sound familiar?). Not only did I get to see some Blue Mix magic, but I also got exposed to awesome visual coding for IoT on the open source Node Red. Add that to my bucket list of things I need to learn! In any case, he was able to come up with the right code to analyze the five traits and get them updating onto the pin. 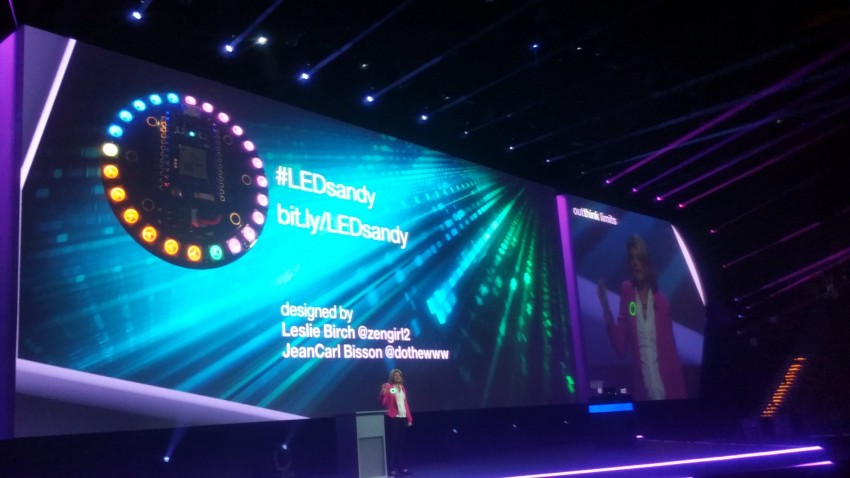 On the day of the big reveal, IBM’s Sandy Carter encouraged people to tweet #LEDsandy. Most of the time the pin stayed green, with a final update as she walked offstage showing mostly green with a bit of red. Considering there are five different responses for tone, we were surprised that the pin was dominated by these colors. Green represents “conscientiousness” while red is “extraversion”, so it is interesting to see the social analysis from the Blue Mix tone analyzer. I would say it indicates a great crowd as well as an amazing experiment. 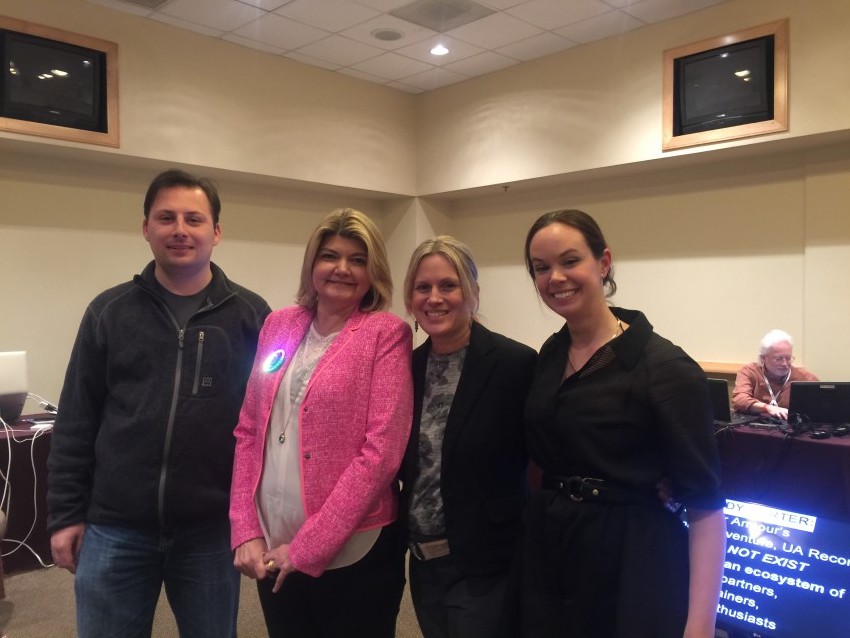 I’m sending a rainbow of LEDs to Sandy Carter, JeanCarl Bisson, and the fearless woman who decided it was a good idea to ask a complete stranger to engage on a project—Kiron Heriot-Darragh. If you want the recipe for innovation, this is it. You’ll find more information about this project and the tone analyzer here. If you didn’t get to attend the conference, but you want to put together your own pin, check out the Adafruit Particle NeoPixel Ring Kit. I think NeoPixel rings are about the handiest thing this side of the universe because they can be used for visual messaging. What would you like to see represented on your pin? 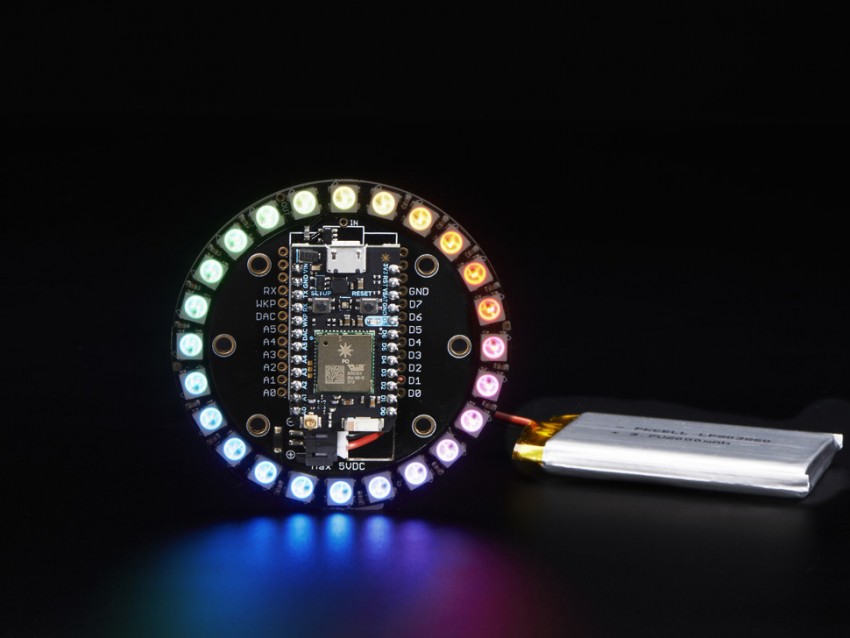 Comments Off on A Social Sentiment Analyzing Pin #WearableWednesday