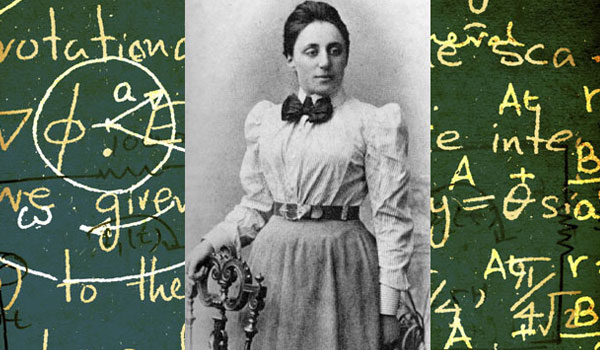 Emmy Noether contributed to abstract algebra and theoretical physics and is described by Einstein as the most important woman in the history of mathematics. via Wikipedia

Emmy Noether was a German Jewish mathematician known for her landmark contributions to abstract algebra and theoretical physics. She was described by Pavel Alexandrov, Albert Einstein, Jean Dieudonné, Hermann Weyl, and Norbert Wiener as the most important woman in the history of mathematics. As one of the leading mathematicians of her time, she developed the theories of rings, fields, and algebras. In physics, Noether’s theorem explains the connection between symmetry and conservation laws.

…Noether’s mathematical work has been divided into three “epochs”. In the first (1908–19), she made contributions to the theories of algebraic invariants and number fields. Her work on differential invariants in the calculus of variations, Noether’s theorem, has been called “one of the most important mathematical theorems ever proved in guiding the development of modern physics”. In the second epoch (1920–26), she began work that “changed the face of [abstract] algebra”. In her classic paper Idealtheorie in Ringbereichen (Theory of Ideals in Ring Domains, 1921) Noether developed the theory of ideals in commutative rings into a tool with wide-ranging applications. She made elegant use of the ascending chain condition, and objects satisfying it are named Noetherian in her honor. In the third epoch (1927–35), she published works on noncommutative algebras and hypercomplex numbers and united the representation theory of groups with the theory of modules and ideals. In addition to her own publications, Noether was generous with her ideas and is credited with several lines of research published by other mathematicians, even in fields far removed from her main work, such as algebraic topology.