A boy with no birthday turns sixty #ArtTuesday 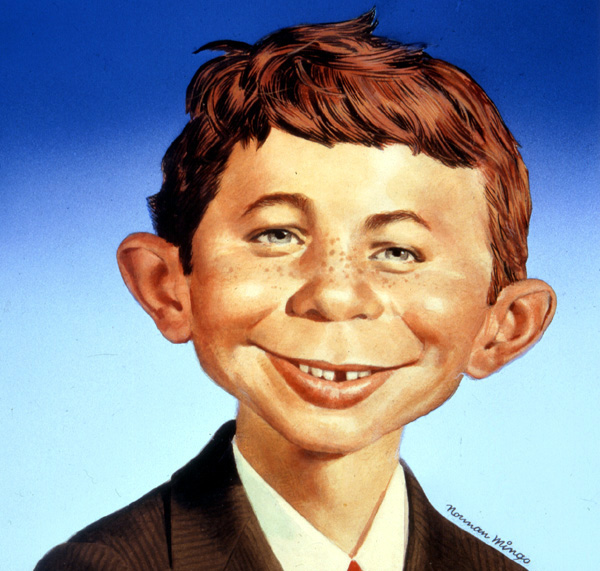 The Paris Review has a nice piece on Alfred E. Neuman, mascot of MAD magazine.

In a 1975 interview with the New York Times, MAD Magazine founder Harvey Kurtzman recalled an illustration of a grinning boy he’d spotted on a postcard in the early fifties: a “bumpkin portrait,” “part leering wiseacre, part happy-go-lucky kid.” It was captioned “What, Me Worry?”

That bumpkin became Alfred E. Neuman, MAD’s mascot, who turns sixty this year—kind of. The impish, immutable redhead made his official debut in December 1956, when he appeared on the cover of MAD no. 30 as a write-in candidate for president. He’s appeared on almost every MAD cover since: possessing, spoofing, and spooking cultural icons with nothing more than a drowsy rictus. Though MAD gave him a purpose, a permanent home, his origin story remains elusive. It involves, among other things, a plum-pudding advertisement, a dubious lawsuit, and a traveling nineteenth-century farce. Neuman is forever synonymous with the magazine and its infinite irreverence, but the riddle of his real age may be the trickster’s trump card.

Comments Off on A boy with no birthday turns sixty #ArtTuesday