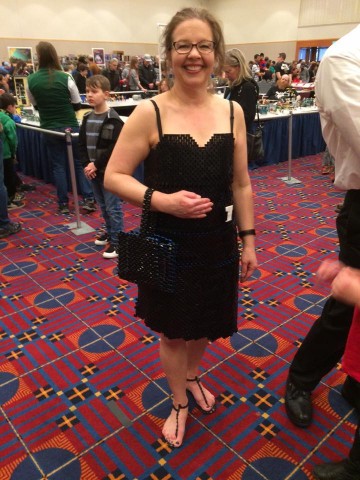 I’ve seen makers create wearable replicas of LEGO minifigs, but I don’t often see entire outfits made from LEGO bricks. Brian D’Agostine, also known as Dag’s Bricks, designed and made a classic little black dress and matching handbag for his wife to wear at Bricks Cascade. He used Technic movable bricks and the dress came as a result of experimenting with how to make wearable LEGO pieces. Brian explains on his website:

When I first played around with staggering rows of 2L rubber technic axle connectors on axles I had no idea how large that table scrap would grow. That little thought grew until it became a pair of flip-flops. Then they got fancy. Then they needed something more so I played around with the same concept in a different way. I used a bunch of 2L technic liftarms and connected them with 3L pins. Once I figured out the pattern I could run long strings. These strings then were fastened together and suddenly I was a weaver, creating large swaths of cloth. With a little finagling I was able to convert these large chunks into form fitting pieces. Thus, a dress was born.

And the stats: The dress is made from around 12,000 individual Technic pieces and weighs about seven pounds. It’s separated into a skirt and bodice so weight was distributed more evenly.

Comments Off on The Perfect LEGO Little Black Dress