Pi Day, the informal holiday beloved by math enthusiasts – and even by the math averse – is almost here! March 14 marks the yearly celebration of the mathematical constant (pi), which represents the ratio of a circle’s circumference to its diameter. More than just a number for mathematicians, pi has all sorts of applications in the real world, including on missions developed by NASA’s Jet Propulsion Laboratory. And as a holiday that encourages more than a little creativity – whether it’s making pi-themed pies or reciting from memory as many of the never-ending decimals of pi as possible (the record is 70,030 digits) – it’s a great way to have fun and celebrate the M in STEM.

Pi is what’s known as an irrational number, meaning its decimal representation never ends and it never repeats. It has been calculated to more than one trillion digits, but 3.14 is often a precise enough approximation, hence the celebration occurring on March 14, or 3/14 (when written in US month/day format). The first known celebration occurred in 1988, and in 2009, the US House of Representatives passed a resolution designating March 14 as Pi Day and encouraging teachers and students to celebrate the day with activities that teach students about pi.

Pi Day is lots of fun, but its importance lies in the role that pi plays in the everyday work of scientists and engineers at JPL.

Fred Calef, a geospatial information scientist at JPL, uses pi to make measurements – like perimeter, area and volume – of features on Mars. “I use pi to measure the circularity of features, or how round or compact they are,” said Calef. “Craters become more elliptical if the projectile hits the surface at a lower angle, so I use pi to measure how round a crater is to see if it impacted at a low angle.”

“We use pi every day commanding rovers on Mars,” said Hallie Gengl, a rover planner for the Mars Exploration Rover Opportunity, “Everything from taking images, turning the wheels, driving around, operating the robotic arm, and even talking to Earth.”

Bryana Henderson, who specializes in planetary ices, uses lasers to explode ice samples and study their composition. “I use pi to calculate the width of my laser beam, which in turn can be used to calculate the amount of energy, or fluence, that hits my ice sample,” said Henderson. “A larger fluence equals a bigger explosion in the ice, so this is a very important parameter for us.”

JPL has released the third installment of its popular Pi Day challenge, which gives students a chance to put their pi skills to the test to solve some of the same problems NASA scientists and engineers do. The set of four illustrated math problems are compiled into a graphic (as well as classroom handouts) designed for students in grade 4 through high school – but fun for all! 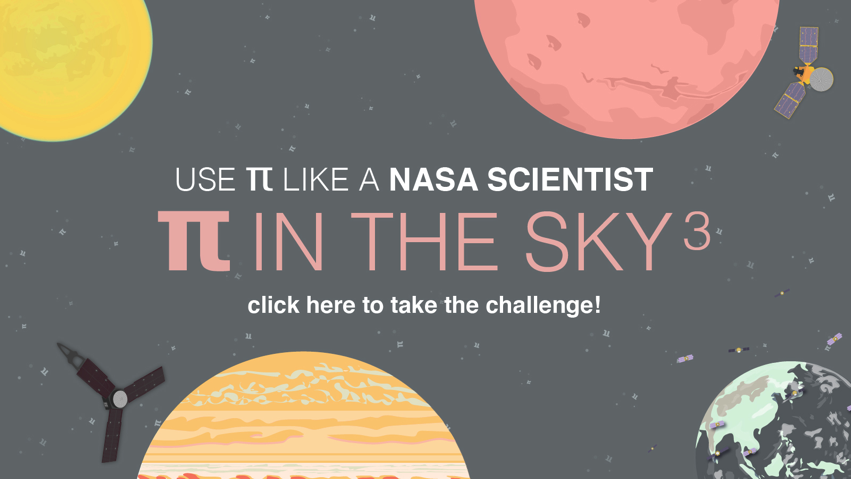 This year’s problem set has students use pi to map the surface of Saturn’s hazy moon Titan, track the Mars Reconnaissance Orbiter as it explores the Red Planet, keep Earth’s satellites powered as Mercury transits the sun, and put the Juno spacecraft into orbit around Jupiter.