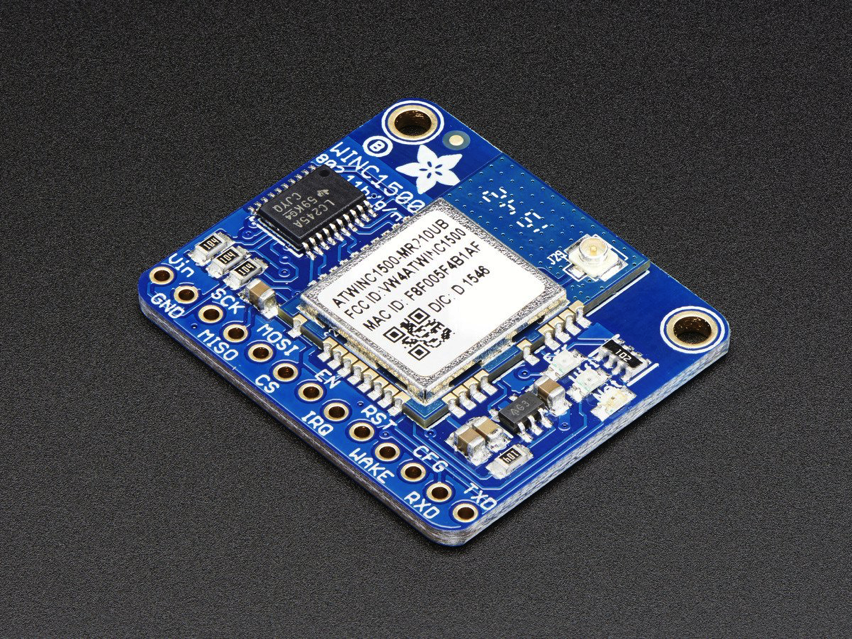 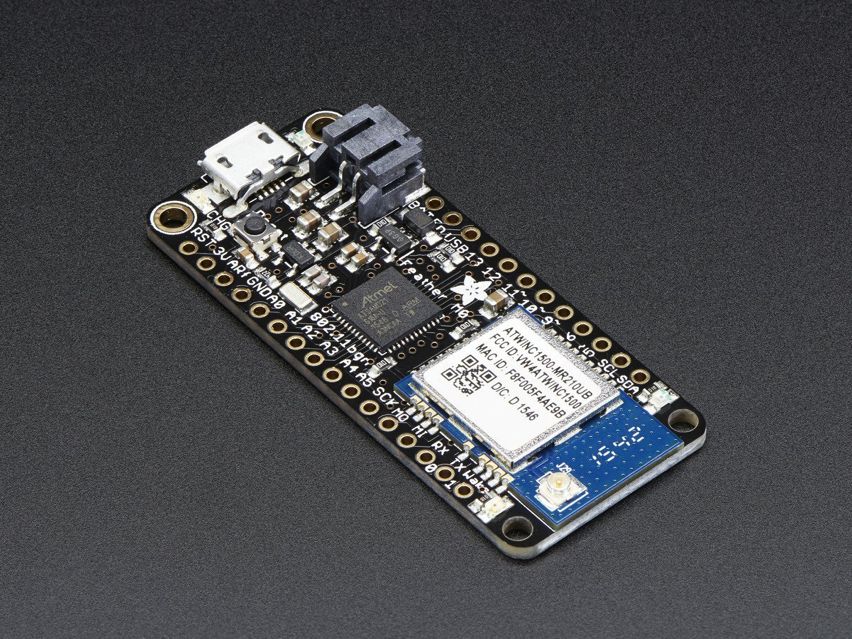 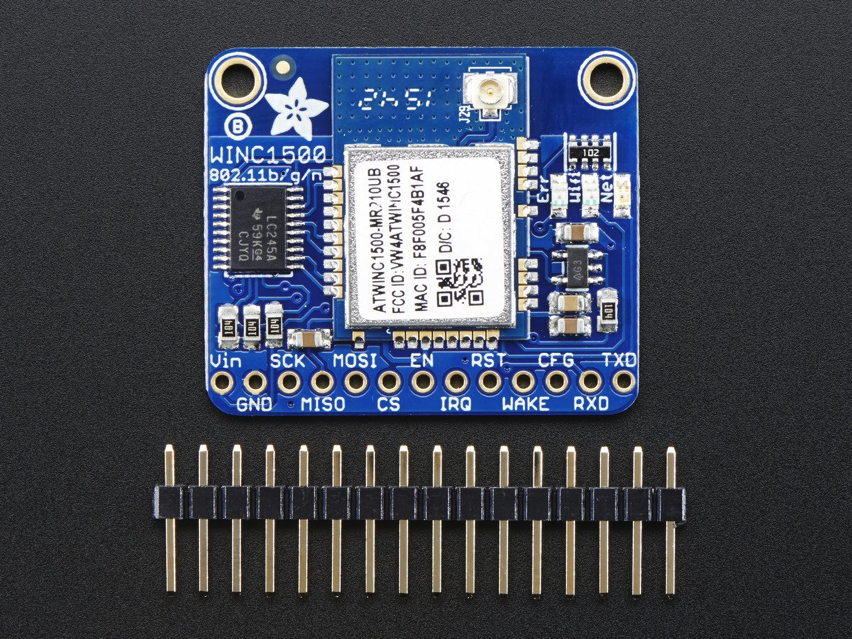 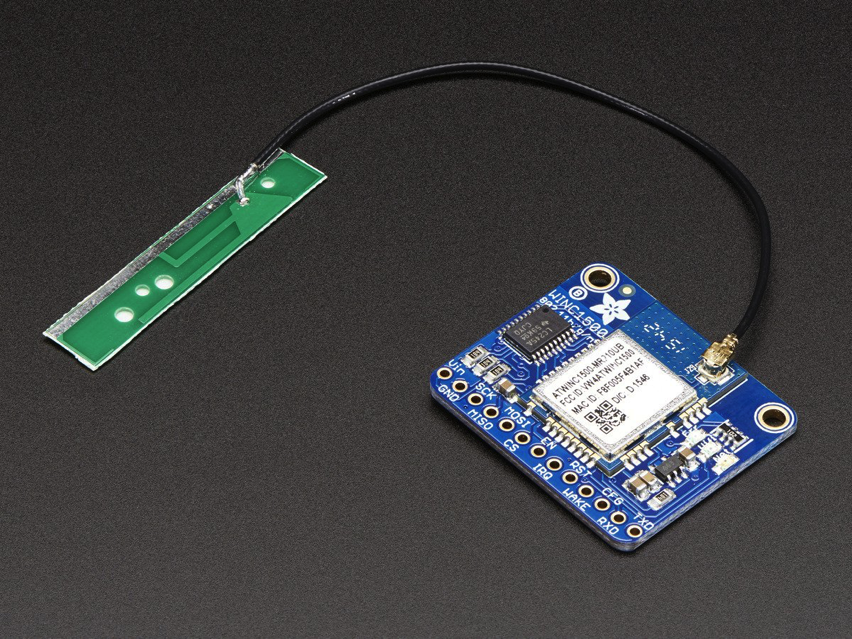 Connect your Arduino to the Internet with this fine new FCC-certified WiFi module from Atmel. This 802.11bgn-capable WiFi module is the best new thing for networking your devices, with SSL support and rock solid performance – running our adafruit.io MQTT demo for a full weekend straight with no hiccups (it would have run longer but we had to go to work, so we unplugged it). We like these so much, they’ve completely replaced the CC3000 module on all our projects.

The Adafruit ATWINC1500 WiFi Breakout uses SPI to communicate, so with about 6 wires, you can get your wired up and ready to go. Right now the Atmel-supplied library works great with Arduino Zero, and seems to work OK on Uno but may not work on other Arduinos. You can clock it as fast as 12MHz for speedy, reliable packet streaming. And scanning/connecting to networks is very fast, a few seconds.

This module works with 802.11b, g, or n networks & supports WEP, WPA and WPA2 encryption. The datasheet says it can do Soft-AP mode but we don’t have any code to actually use that. 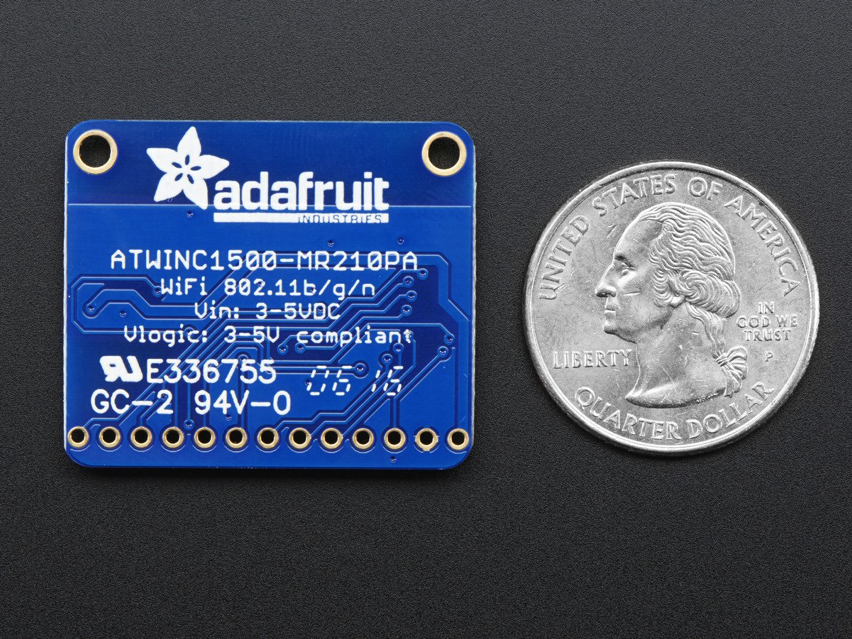 Since this is our new favoritest SPI-protocol WiFi module we’ve decided to make a little breakout for it. The breakout comes with level shifting on all the input pins so you can use it with 3V or 5V logic. A 3.3V voltage regulator that can handle the 300mA spikes lets you power from 3-5.5VDC. There’s also 3 LEDs that you can control over the SPI interface (part of the library code) or you can have controlled by the Arduino library. They’ll light up when connected to an SSID, or transmitting data.

Note: This version does not come with an onboard antenna, you will need a uFL connector antenna such as 2.4GHz Mini Flexible WiFi Antenna – not included! We have a version with on-board antenna as well.

Comes with a stick of header you can solder on, to plug into a breadboard and a set of tutorials & code so you can follow along! 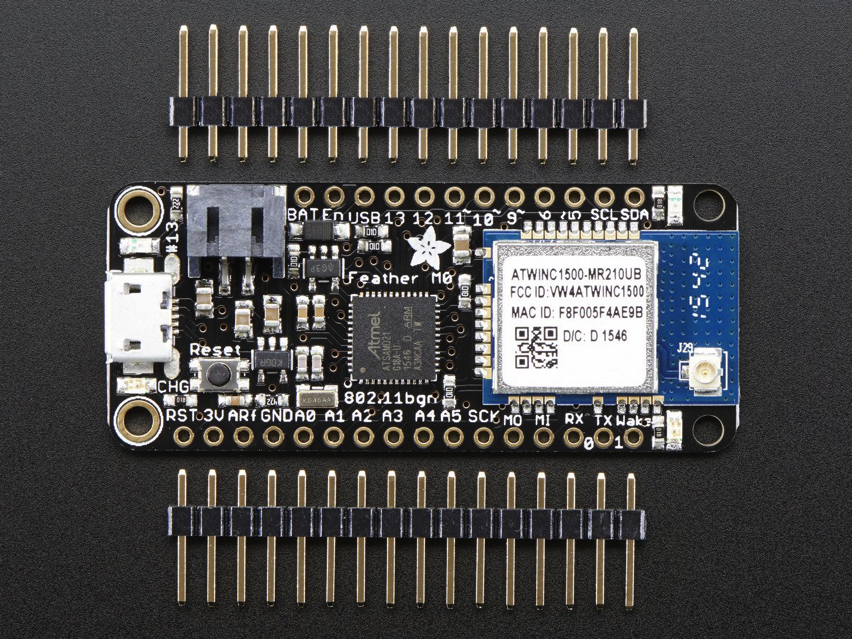 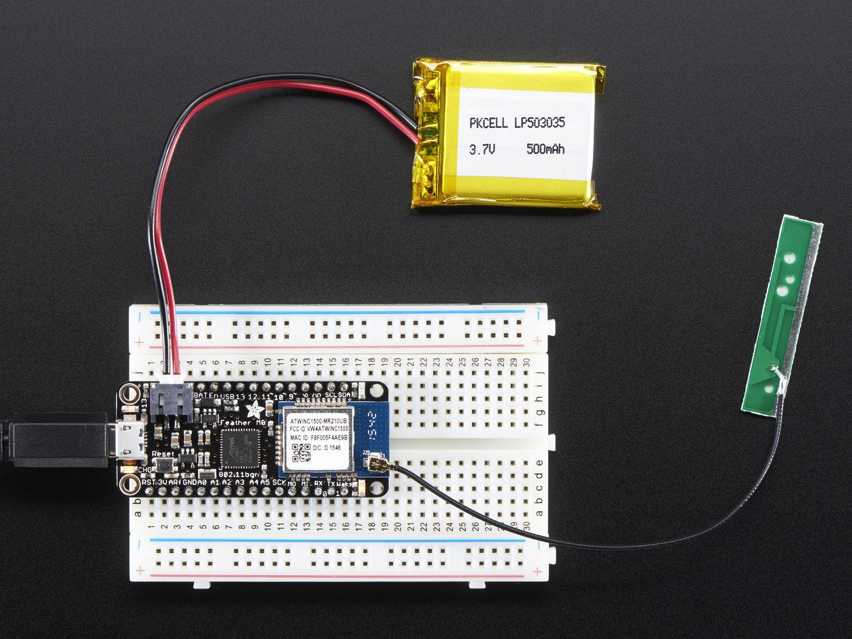 Feather is the new development board from Adafruit, and like its namesake it is thin, light, and lets you fly! We designed Feather to be a new standard for portable microcontroller cores. This is the Adafruit Feather M0 WiFi w/ATWINC1500 – our take on an ‘all-in-one’ Arduino-compatible + high speed, reliable WiFi with built in USB and battery charging. Its an Adafruit Feather M0 with a WiFi module, ready to rock! We have other boards in the Feather family, check’em out here.

Connect your Feather to the Internet with this fine new FCC-certified WiFi module from Atmel. This 802.11bgn-capable WiFi module is the best new thing for networking your devices, with built-in low-power management capabilites, Soft-AP, SSL support and rock solid performance. We were running our adafruit.io MQTT demo for a full weekend straight with no hiccups (it would have run longer but we had to go to work, so we unplugged it). This module is very fast & easy to use in comparison to other WiFi modules we’ve used in the past.

This module works with 802.11b, g, or n networks & supports WEP, WPA and WPA2 encryption. You can connect to your own WiFi networks or create your own with “Soft AP” mode, where it becomes its own access point (we have an example of it creating a webserver that you can then control the Arduino’s pins). You can clock it as fast as 12MHz for speedy, reliable packet streaming. And scanning/connecting to networks is very fast, just a second or two. 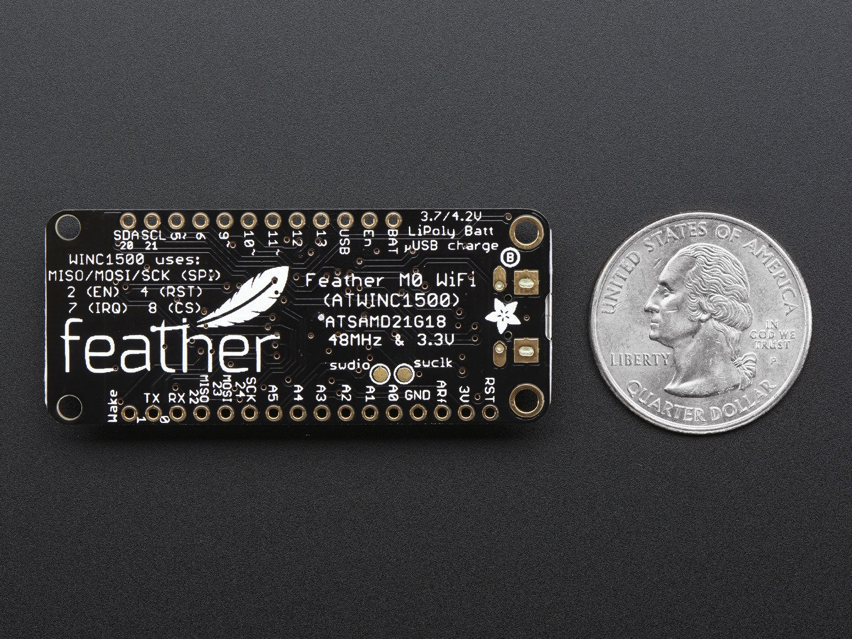 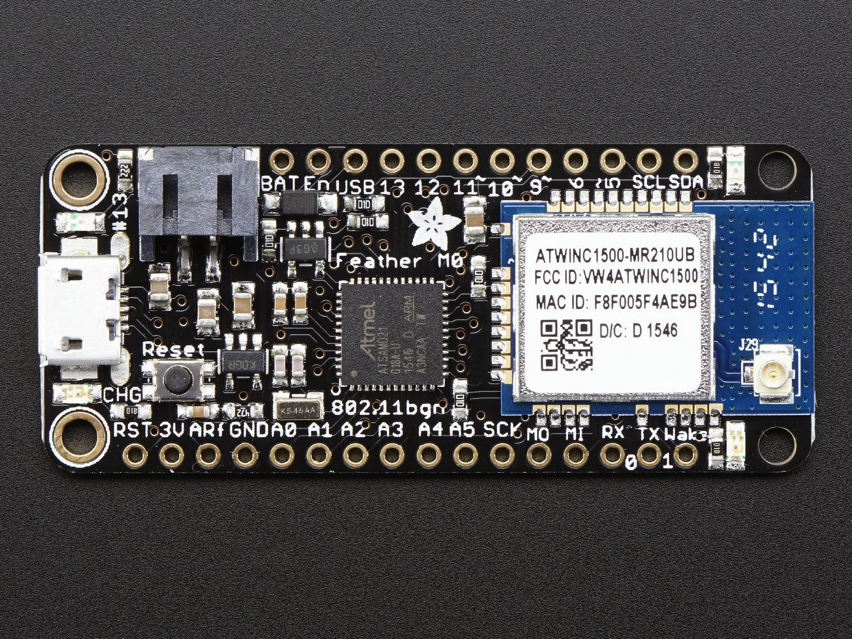 At the Feather M0’s heart is an ATSAMD21G18 ARM Cortex M0 processor, clocked at 48 MHz and at 3.3V logic, the same one used in the new Arduino Zero. This chip has a whopping 256K of FLASH (8x more than the Atmega328 or 32u4) and 32K of RAM (16x as much)! This chip comes with built in USB so it has USB-to-Serial program & debug capability built in with no need for an FTDI-like chip. For advanced users who are comfortable with ASF, the SWDIO/SWCLK pins are available on the bottom, and when connected to a CMSIS-DAP debugger can be used to use Atmel Studio for debugging.

Note: This version does not come with an onboard antenna, you will need a uFL connector antenna such as 2.4GHz Mini Flexible WiFi Antenna – not included! We have a version with on-board antenna as well.