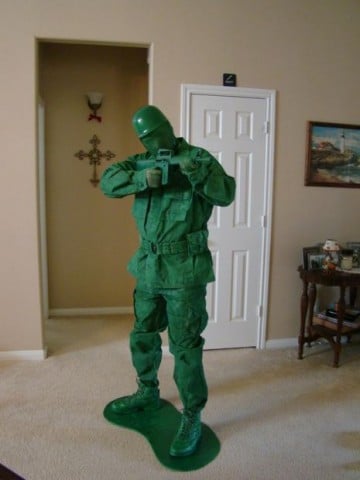 Plastic green army men are a popular, almost universal cheap toy for kids. They’re sold by the bucket and with a little imagination, they’re the best. Toy Story featured the toys, and as a result, I’ve seen more than a few people tackle costumes. Instructables user JT3OSU made a fantastic Green Army Man ensemble using an Army BDU jacket (you can probably find one in a military surplus store), cargo pants, pantyhose, plywood, about 12 cans of green spray paint, and a few more supplies. The gist of the project is you’ll be covering everything in a bright shade of green with spray paint — after using primer. JT3OSU used he cheapest spray paint he could find and it worked out okay. Getting complete coverage required anywhere from two to four coats of paint.

He made the base late from 1/4 inch thick plywood. He based his design for the plate on an actual plastic toy and said:

Cut the shape out with a jigsaw and sand as needed.

Prime and paint. Again, PRIME first so that all the items will be the same shade of green.

I used three short screws and from the bottom of the baseplate screwed through the board and into the sole of ONE boot. I only attached one boot so I could walk around. When I stopped, I could just set my other foot in the proper position.

Tip: You can actually cut the baseplate into two halves and screw each piece to its respective boot. Then you can walk easier (like a set of snow shoes). 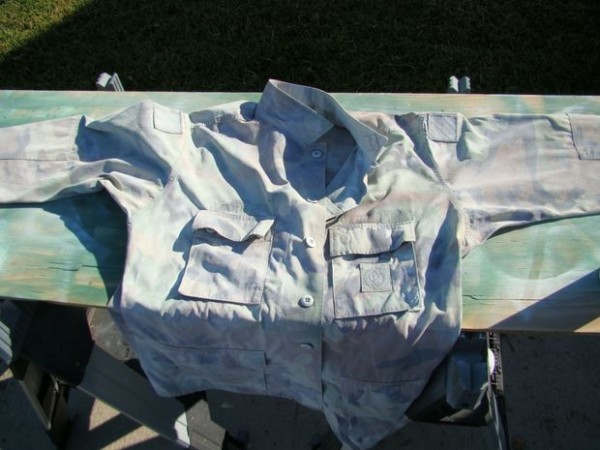 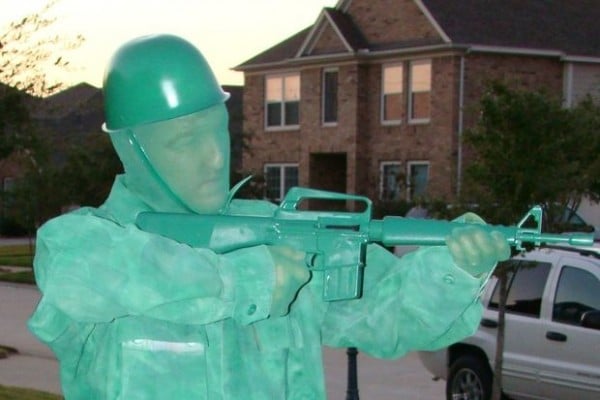 Get the full Green Army Man how-to at Instructables.