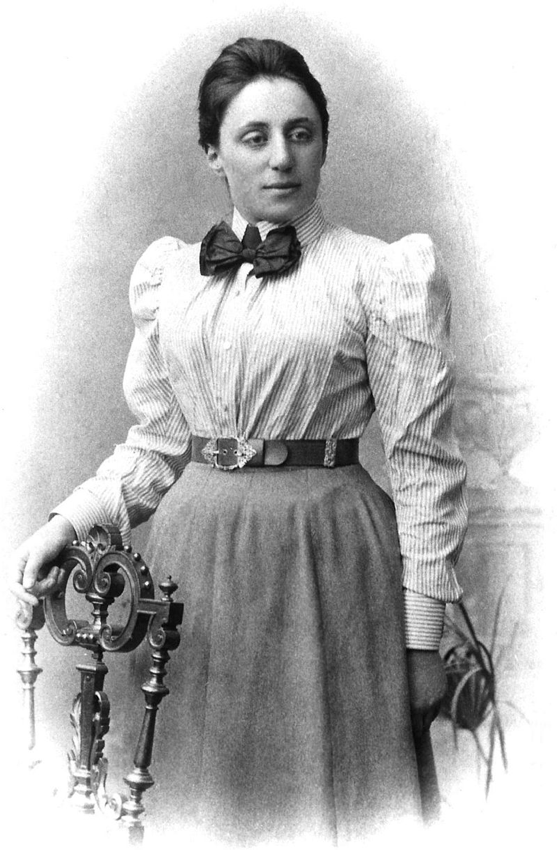 Emmy Noether was one of the most influential mathematicians of all time. From wikipedia:

Emmy Noether was a German Jewish mathematician known for her landmark contributions to abstract algebra and theoretical physics. She was described by Pavel Alexandrov, Albert Einstein, Jean Dieudonné, Hermann Weyl, and Norbert Wiener as the most important woman in the history of mathematics. As one of the leading mathematicians of her time, she developed the theories of rings, fields, and algebras. In physics, Noether’s theorem explains the connection between symmetry and conservation laws.

Noether was born to a Jewish family in the Franconian town of Erlangen; her father was a mathematician, Max Noether. She originally planned to teach French and English after passing the required examinations, but instead studied mathematics at the University of Erlangen, where her father lectured. After completing her dissertation in 1907 under the supervision of Paul Gordan, she worked at the Mathematical Institute of Erlangen without pay for seven years. (At the time, women were largely excluded from academic positions.) In 1915, she was invited by David Hilbert and Felix Klein to join the mathematics department at the University of Göttingen, a world-renowned center of mathematical research. The philosophical faculty objected, however, and she spent four years lecturing under Hilbert’s name. Her habilitation was approved in 1919, allowing her to obtain the rank of Privatdozent.

Noether remained a leading member of the Göttingen mathematics department until 1933; her students were sometimes called the “Noether boys”. In 1924, Dutch mathematician B. L. van der Waerden joined her circle and soon became the leading expositor of Noether’s ideas: her work was the foundation for the second volume of his influential 1931 textbook, Moderne Algebra. By the time of her plenary address at the 1932 International Congress of Mathematicians in Zürich, her algebraic acumen was recognized around the world. The following year, Germany’s Nazi government dismissed Jews from university positions, and Noether moved to the United States to take up a position at Bryn Mawr College in Pennsylvania. In 1935 she underwent surgery for an ovarian cyst and, despite signs of a recovery, died four days later at the age of 53.

Noether’s mathematical work has been divided into three “epochs”. In the first (1908–19), she made contributions to the theories of algebraic invariants and number fields. Her work on differential invariants in the calculus of variations, Noether’s theorem, has been called “one of the most important mathematical theorems ever proved in guiding the development of modern physics”. In the second epoch (1920–26), she began work that “changed the face of [abstract] algebra”. In her classic paper Idealtheorie in Ringbereichen (Theory of Ideals in Ring Domains, 1921) Noether developed the theory of ideals in commutative rings into a tool with wide-ranging applications. She made elegant use of the ascending chain condition, and objects satisfying it are named Noetherian in her honor. In the third epoch (1927–35), she published works on noncommutative algebras and hypercomplex numbers and united the representation theory of groups with the theory of modules and ideals. In addition to her own publications, Noether was generous with her ideas and is credited with several lines of research published by other mathematicians, even in fields far removed from her main work, such as algebraic topology.