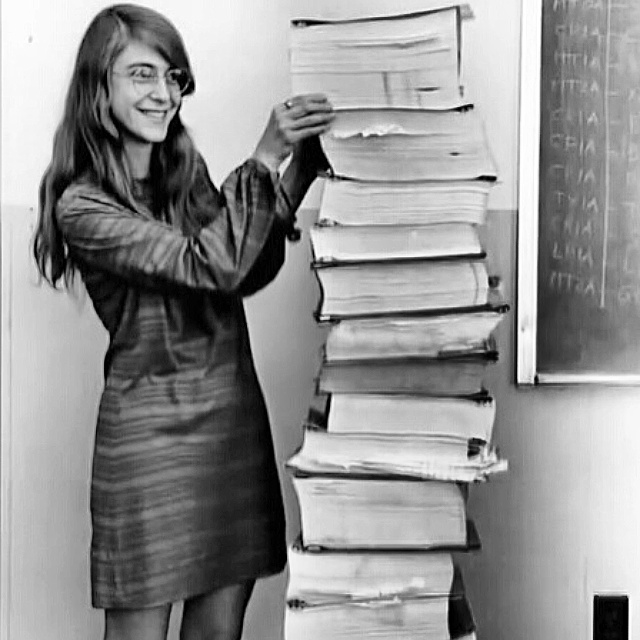 Margaret Hamilton is a computer scientist and systems engineer. She was the Director of the MIT Software Engineering Division that developed on-board software for the Apollo space program, via Wired

MARGARET HAMILTON WASN’T supposed to invent the modern concept of software and land men on the moon. It was 1960, not a time when women were encouraged to seek out high-powered technical work. Hamilton, a 24-year-old with an undergrad degree in mathematics, had gotten a job as a programmer at MIT, and the plan was for her to support her husband through his three-year stint at Harvard Law. After that, it would be her turn—she wanted a graduate degree in math.

But the Apollo space program came along. And Hamilton stayed in the lab to lead an epic feat of engineering that would help change the future of what was humanly—and digitally—possible.

As a working mother in the 1960s, Hamilton was unusual; but as a spaceship programmer, Hamilton was positively radical. Hamilton would bring her daughter Lauren by the lab on weekends and evenings. While 4-year-old Lauren slept on the floor of the office overlooking the Charles River, her mother programmed away, creating routines that would ultimately be added to the Apollo’s command module computer.

“People used to say to me, ‘How can you leave your daughter? How can you do this?’” Hamilton remembers. But she loved the arcane novelty of her job. She liked the camaraderie—the after-work drinks at the MIT faculty club; the geek jokes, like saying she was “going to branch left minus” around the hallway. Outsiders didn’t have a clue. But at the lab, she says, “I was one of the guys.”

Then, as now, “the guys” dominated tech and engineering. Like female coders in today’s diversity-challenged tech industry, Hamilton was an outlier. It might surprise today’s software makers that one of the founding fathers of their boys’ club was, in fact, a mother—and that should give them pause as they consider why the gender inequality of the Mad Men era persists to this day.

As Hamilton’s career got under way, the software world was on the verge of a giant leap, thanks to the Apollo program launched by John F. Kennedy in 1961. At the MIT Instrumentation Lab where Hamilton worked, she and her colleagues were inventing core ideas in computer programming as they wrote the code for the world’s first portable computer. She became an expert in systems programming and won important technical arguments. “When I first got into it, nobody knew what it was that we were doing. It was like the Wild West. There was no course in it. They didn’t teach it,” Hamilton says.

This was a decade before Microsoft and nearly 50 years before Marc Andreessen would observe that software is, in fact, “eating the world.” The world didn’t think much at all about software back in the early Apollo days. The original document laying out the engineering requirements of the Apollo mission didn’t even mention the word software, MIT aeronautics professor David Mindell writes in his book Digital Apollo. “Software was not included in the schedule, and it was not included in the budget.” Not at first, anyhow.

But as the Apollo project unfolded, the centrality of software in accomplishing the mission started to become clear. In 1965, Hamilton became responsible for the onboard flight software on the Apollo computers. It was an exciting time, and the US was depending on the work that she was doing. But sometimes the pressure kept Hamilton up at night. Once, after a late-night party, she rushed back to the computer lab to correct a piece of code she’d suddenly realized was flawed. “I was always imagining headlines in the newspapers, and they would point back to how it happened, and it would point back to me.”