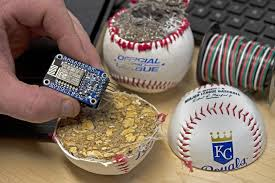 Relay the Way, the 9.49-mile baseball toss set for the Royals’ opening day, is already a success — and it’s about to get even better.

It took less than three days to sign up the 2,500 people needed to throw the ball, about 20 feet each, from Union Station to Kauffman Stadium, where it will be used Sunday for the first pitch of the world champions’ 2016 season.

And everyone who signed up could make a donation to the event — $30 was suggested — raising money and awareness for the Kansas City MLB Urban Youth Academy.

Not bad for a long game of short toss.

But VML, the Kansas City-based agency that came up with the idea, didn’t stop there.

“We didn’t want this to be a one-off public relations event,” said Tony Snethen, executive creative director at VML, which is known for innovative digital marketing. “We wanted to get the whole city involved … so we thought about how to add a digital component.”

To do that, Matt Bell, VML’s resident mad scientist (that’s his real job title), is turning the baseball into a smart ball, with a tiny computer embedded in its core. For $1, any baseball fan in Kansas City — or anywhere around the world — can sign up at RelayTheWay.com to send the ball a tweet, perhaps about what baseball in Kansas City means to them.

And just before the ball crosses the plate — or bounces in the dirt, as ceremonial first pitches sometimes do — the thousands of messages will be uploaded into the ball, making it a digital time capsule of the event and the day.

To make the ball smart, Bell has cut open several to examine what sorts of twine and cork and other materials are inside. He has used computer-aided design software to make 2D models of various approaches to removing the core, replacing it with a Wi-Fi-capable computer chip and closing the ball back up.

Bell also has worked to keep the ball’s weight regulation, so it will feel just like a regular ball for everyone in this longest Opening Day first pitch ever. Only a small USB port on the ball will give it away.

Bell also has used a 3D printer at VML’s innovation lab to make cushioning materials for the computer core so it will survive being dropped along the route.