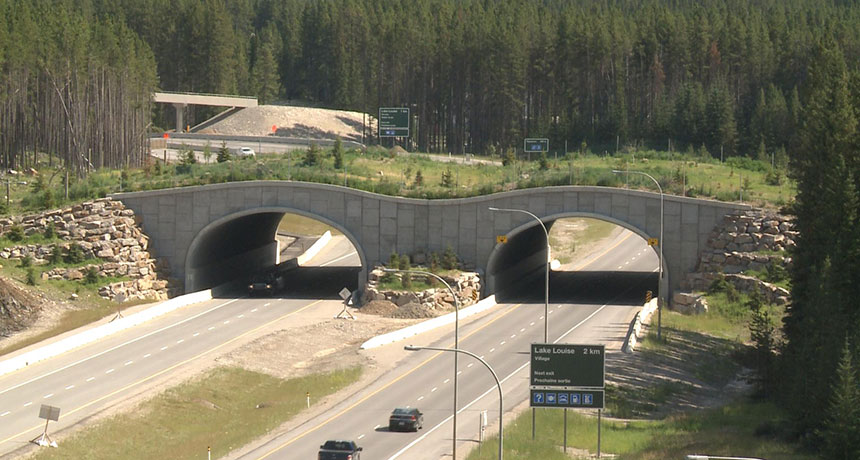 Thousands of national parks have been established around the world to preserve wildlife. But towns, farms, ranches and roads have grown up around many of these parks, creating islands of wilderness in a sea of humanity. If the creatures inside are to thrive, they need ways to travel between the islands, contends “Wild Ways,” a new documentary from the TV series NOVA.

Isolation can be especially troublesome for large predators, such as lions, that live alone or in small groups. In some areas of Africa, lions can move between populations to avoid inbreeding. But some lions, such as the few in Tanzania’s Ngorongoro Crater, are cut off from other groups. In such populations, cubs are born smaller, die younger and are more susceptible to disease. And drought or overhunting could easily wipe them out, the show notes.

To connect these smaller populations, conservationists are now building wildlife corridors between parks. One of the most ambitious projects is the Yellowstone to Yukon Conservation Initiative, which aims to create connections between grizzly bears in the Canadian Arctic and the western United States. Other large wildlife corridors are being planned in Central America, eastern Australia and the Himalayas. But there are often roadblocks. It can be difficult to persuade people to spend money on wildlife, and it can be even harder when those animals kill livestock or humans.

“It is important that we provide incentives for local communities, in particular, who should now look at wildlife as some form of economic asset to themselves,” says Simon Munthali of the Kavango-Zambezi Transfrontier Conservation Area, which is attempting to connect parks in five countries across southern Africa. With the right incentives, people will be more accepting of wildlife moving across land and may even benefit from it, he says in the documentary. Botswana, for instance, has developed a large ecotourism industry that provides jobs and money for local people, motivating animal protection.

Comments Off on Wildlife Corridors