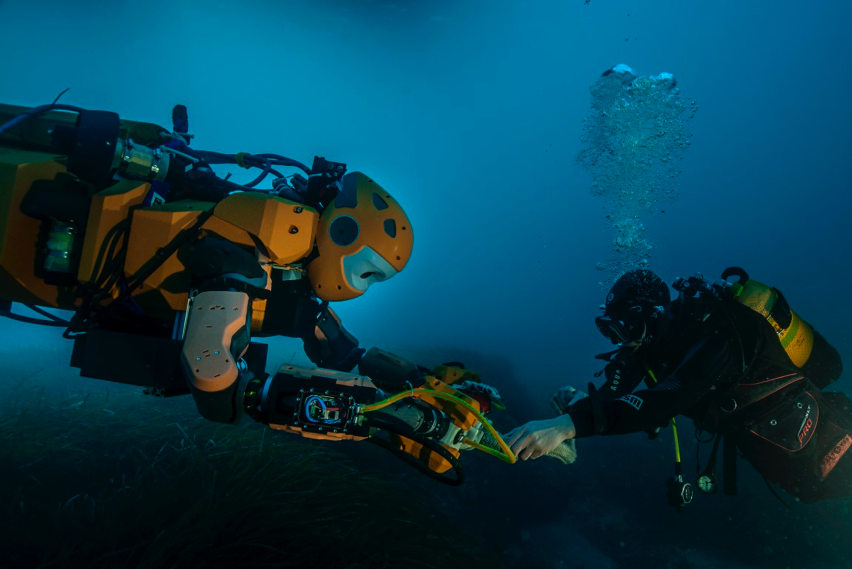 …Originally, OceanOne was not an archaeological robot—it was conceptualized by King Abdullah University of Science and Technology (KAUST) in Saudi Arabia as a way of monitoring deep coral reefs in the Red Sea. Christian Voolstra, assistant professor of marine science at KAUST’s Red Sea Research Center, explained where the idea came from in an interview last year:

Currently people use a so-called ROV (remote operated vehicle), which is a little submarine with two robotic arms and very limited dexterity. Using the ROV to examine delicate coral colonies proved to be troublesome. Prof. Khaled Salama (who is a professor in KAUST’s electrical engineering division) knew people at Stanford University who might be able to aid us in creating a new robotic interface system. We got in touch with the Stanford team and told them that we were not happy with the engineering solutions that are currently available. They said, “Ok, we know how to build robots … why not build an underwater robot?”

OceanOne is different from, and arguably better than, traditional underwater ROVs for a bunch of reasons. It’s smaller, approximately the size of a human diver (about 5 feet in length), which helps keep it nimble. Rather than waterproofing the electronics to keep air in, they’re immersed in oil instead, which doesn’t compress, giving the robot a maximum depth of 2000 meters (!). OceanOne is designed to maneuver with precision in tight spaces using eight thrusters, and can autonomously keep itself stable in currents or surge. With current underwater vehicles, “you spent the majority of time keeping the robot stable,” Dr. Voolstra told IEEE Spectrum, “rather than focusing on the research task.”