Off the Beat and Into a Museum: Art Helps Police Officers Learn to Look #ArtTuesday 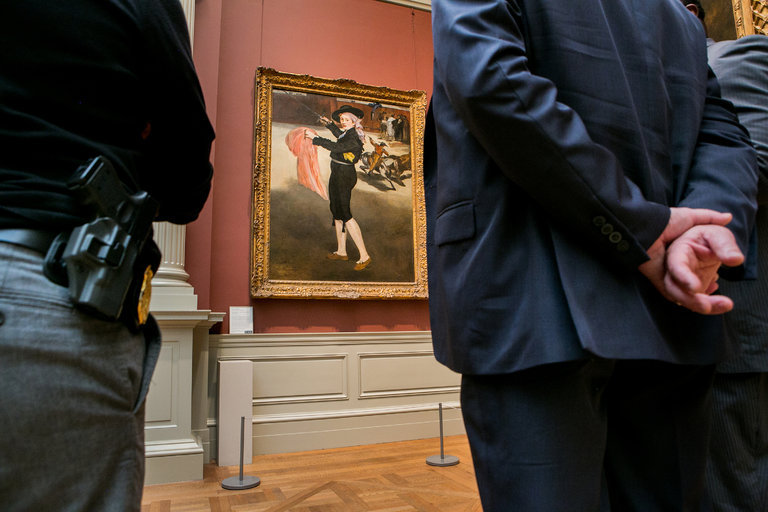 Interesting piece from the NY Times about using art as a means of helping police officers to notice details.

To teach people how to notice details they might otherwise miss, Amy E. Herman, an expert in visual perception, likes to take them to museums and get them to look at the art. Recently she escorted a group of New York City police officers to the Metropolitan Museum of Art and asked them to describe some of the things they saw.

They did their best. “This seems to be a painting of some males with horses,” one officer said of Rosa Bonheur’s mid-19th-century work “The Horse Fair,” a scene of semi-chaos as horses are driven to market. He tried to abide by Ms. Herman’s admonishment to avoid words like “obviously.” “It appears to be daytime, and the horses appear to be traveling from left to right.”

Another pair of officers tackled Picasso’s 1905 “At the Lapin Agile,” which depicts a wilted-looking couple sitting at a French bar after what might have been a long night out. “They appear to have had an altercation,” one observed. The other said, “The male and female look like they’re together, but the male looks like he’ll be sleeping on the couch.”

The officers asked that their names not be used because they were not authorized to speak to reporters. They said that they did not know much about art — their jobs allow little opportunity for recreational museumgoing — and Ms. Herman said she preferred it that way.

“I’ve had people say, ‘I hate art,’ and I say, ‘That’s not relevant,’” she said. “This is not a class about Pollock versus Picasso. I’m not teaching you about art today; I’m using art as a new set of data, to help you clear the slate and use the skills you use on the job. My goal when you walk out the door is that you’re thinking differently about the job.”

A painting has many functions. It’s a cultural artifact, an aesthetic object, an insight into a time and a place, a piece of commerce. To Ms. Herman, it’s also an invaluable repository of visual detail that can help shed light on, say, how to approach a murder scene. “It’s extremely evocative and perfect for critical inquiry,” she said in an interview. “What am I seeing here? How do I attach a narrative to it?”

Comments Off on Off the Beat and Into a Museum: Art Helps Police Officers Learn to Look #ArtTuesday