Creating a Prosthetic Hand That Can Feel #WearableWednesday 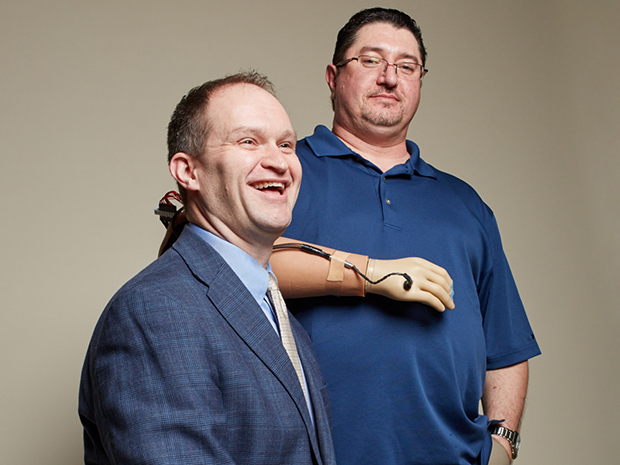 Wearing a blindfold and noise-canceling headphones, Igor Spetic gropes for the bowl in front of him, reaches into it, and picks up a cherry by its stem. He uses his left hand, which is his own flesh and blood. His right hand, though, is a plastic and metal prosthetic, the consequence of an industrial accident. Spetic is a volunteer in our research at the Louis Stokes Cleveland Veterans Affairs Medical Center, and he has been using this “myoelectric” device for years, controlling it by flexing the muscles in his right arm. The prosthetic, typical of those used by amputees, provides only crude control. As we watch, Spetic grabs the cherry between his prosthetic thumb and forefinger so that he can pull off the stem. Instead, the fruit bursts between his fingers.

Next, my colleagues and I turn on the haptic system that we and our partners have been developing at the Functional Neural Interface Lab at Case Western Reserve University, also in Cleveland. Previously, surgeons J. Robert Anderson and Michael Keith had implanted electrodes in Spetic’s right forearm, which now make contact with three nerves at 20 locations. Stimulating different nerve fibers produces realistic sensations that Spetic perceives as coming from his missing hand: When we stimulate one spot, he feels a touch on his right palm; another spot produces sensation in his thumb, and so on.

To test whether such sensations would give Spetic better control over his prosthetic hand, we put thin-film force sensors in the device’s index and middle fingers and thumb, and we use the signals from those sensors to trigger the corresponding nerve stimulation. Again we watch as Spetic grasps another cherry. This time, his touch is delicate as he pulls off the stem without damaging the fruit in the slightest.

In our trials, he’s able to perform this task 93 percent of the time when the haptic system is turned on, versus just 43 percent with the haptics turned off. What’s more, Spetic reports feeling as though he is grabbing the cherry, not just using a tool to grab it. As soon as we turn the stimulation on, he says, “It is my hand.” 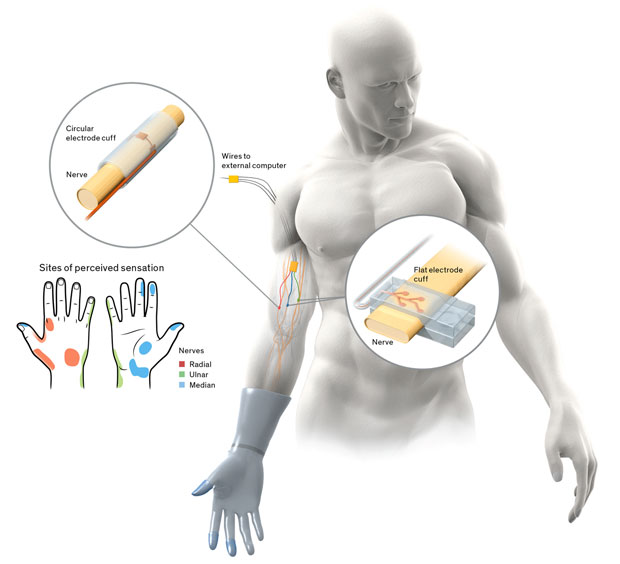 Comments Off on Creating a Prosthetic Hand That Can Feel #WearableWednesday