Maybe you’ve heard that earlier this week NASA confirmed the existence of 1,284 exoplanets by the Kepler telescope: 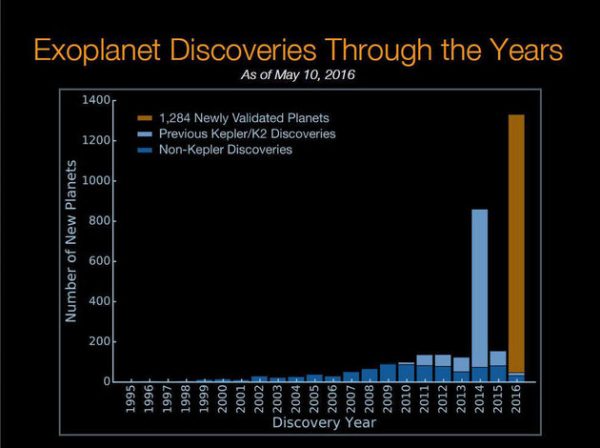 But what’s really interesting if you dive deeper into The Astrophysical Journal paper that announced the findings, is the number of other KOIs or Kepler Objects of Interest, that are either still waiting to be confirmed as planets or not, or which might be other types of objects in space:

The 1,284 confirmed planets are ‘false positive probabilities’ (FPP) where the probability exceeds a certain threshold for being ‘confirmed’ as a planet; there are still many, many ‘candidate’ KOIs out there! Or in the words of NASA Astrophysics Director Paul Herz, “Thanks to Kepler and the research community, we now know there could be more planets than stars.”

The Kepler mission has revolutionized our understanding of exoplanets. Among many other important discoveries, Kepler has identified several previously unsuspected features of planetary systems, such as the prevalence of planets between the size of Earth and Neptune, and a population of very compact multiple-planet systems. And perhaps most notably, it has enabled for the first time estimates of the occurrence rates of small planets ($\gtrsim 1$ ${R}_{\oplus }$) out to orbits of about one year (e.g., Petigura et al. 2013; Foreman-Mackey et al. 2014; Burke et al. 2015). It is important to remember, however, that these revolutionary discoveries depend intimately on another revolution—how to interpret transiting planet candidate signals in the absence of unambiguous positive confirmation of their veracity.

Read the full report here at the Institute of Physics.

Watch the SpaceX Droneship Landing … in 360!
Actual Things from Space: One Photo of 3 Moons
This Week in Space: Hubble Telescope Discovers New Moon in Our Solar System

Comments Off on This Week in Space: 1,284 ‘Newly Validated Planets,’ Possibly 1,000+ More To Be Confirmed #NASA