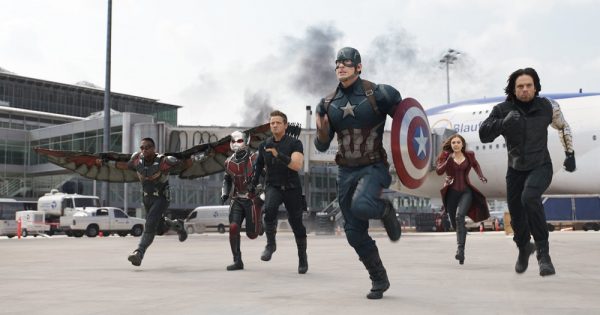 Captain America: Civil War is an even bigger film than either of the Avengers movies. It brings together a ton of heroes and introduces a couple of new ones to the Marvel Cinematic Universe with Spider-Man and Black Panther. I can’t imagine the challenges that come with creating all the different looks, but costume designer Judianna Makovsky is a pro. She came to Civil War with experience from films such as Harry Potter and the Sorcerer’s Stone, X-Men: The Last Stand, and The Hunger Games. Makovsky talked with Tyranny of Style about creating everything from the superhero costumes to the street clothes for Civil War and shared some interesting tidbits.

For example, she talked with the directors — the Russo brothers — about showing how Steve Rogers has embraced more of a modern lifestyle since Winter Soldier. She says, “In Civil War, Steve is now adjusted to this world so we felt we could reintroduce the brown leather, so I designed a leather jacket for him that would be modern, but classic at the same time. By using a washed leather, it immediately became more modern. I always kept in mind that he should exhibit a classic all-American look with slim cut jeans and trousers and simple t-shirts.”

The debut of Black Panther was an aspect of the film that was highly anticipated; Makovsky worked closely with Marvel to get it right. She says, “The suit itself had to be very malleable and flexible, but still look like it has vibranium woven into it. The actor needed to have very feline movement so to find a fabric that would convey that was a challenge. It is made up of a stretch with three different interwoven textures as well as molded pieces. The hardest part was getting the suit to not be bulky and reflect the body of a gymnast instead of a big muscular superhero.”

Read the complete interview with Makovsky and see costume concept art at Tyranny of Style.