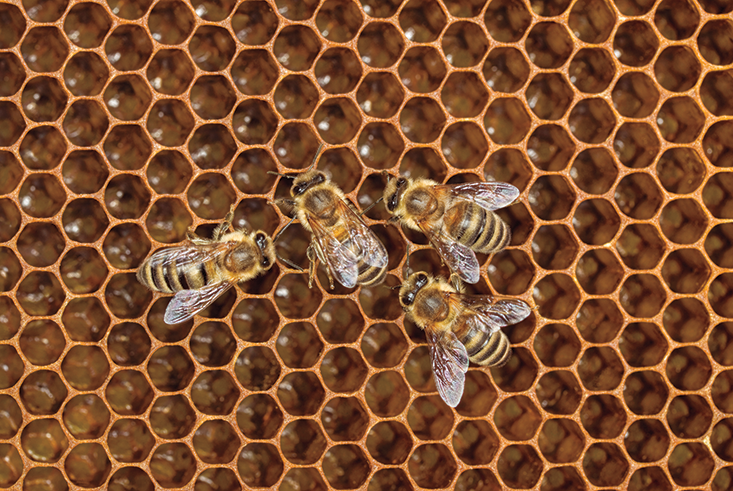 Interesting article from Nautilus on the geometry found in nature.

How do bees do it? The honeycombs in which they store their amber nectar are marvels of precision engineering, an array of prism-shaped cells with a perfectly hexagonal cross-section. The wax walls are made with a very precise thickness, the cells are gently tilted from the horizontal to prevent the viscous honey from running out, and the entire comb is aligned with the Earth’s magnetic field. Yet this structure is made without any blueprint or foresight, by many bees working simultaneously and somehow coordinating their efforts to avoid mismatched cells.

The ancient Greek philosopher Pappus of Alexandria thought that the bees must be endowed with “a certain geometrical forethought.” And who could have given them this wisdom, but God? According to William Kirby in 1852, bees are “Heaven-instructed mathematicians.” Charles Darwin wasn’t so sure, and he conducted experiments to establish whether bees are able to build perfect honeycombs using nothing but evolved and inherited instincts, as his theory of evolution would imply.

Why hexagons, though? It’s a simple matter of geometry. If you want to pack together cells that are identical in shape and size so that they fill all of a flat plane, only three regular shapes (with all sides and angles identical) will work: equilateral triangles, squares, and hexagons. Of these, hexagonal cells require the least total length of wall, compared with triangles or squares of the same area. So it makes sense that bees would choose hexagons, since making wax costs them energy, and they will want to use up as little as possible—just as builders might want to save on the cost of bricks. This was understood in the 18th century, and Darwin declared that the hexagonal honeycomb is “absolutely perfect in economizing labor and wax.”

Darwin thought that natural selection had endowed bees with instincts for making these wax chambers, which had the advantage of requiring less energy and time than those with other shapes. But even though bees do seem to possess specialized abilities to measure angles and wall thickness, not everyone agrees about how much they have to rely on them. That’s because making hexagonal arrays of cells is something that nature does anyway.

Comments Off on Why nature prefers hexagons #biology #physics