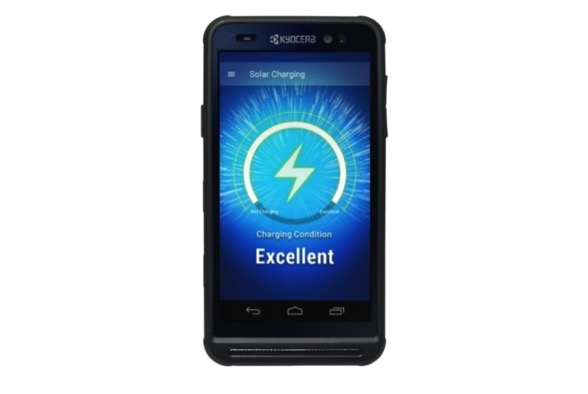 Article detailing some of the progress and obstacles affecting solar powered cellphones, Via ScientificAmerican

Solar-powered streetlights and parking meters are not hard to find, nor are photovoltaic panels that deliver energy to houses and factories. These advances beg a big question: Will we ever be able to use the sun to power our ubiquitous smartphones and other mobile gadgets instead of plugging them into the grid every night?
The answer depends not only on efficiency gains in photovoltaic cell technology but also on where those cells are placed on our devices and where we store them—many of us keep our smartphones stuffed in a pocket or handbag for much of the day, out of reach of the sun’s energy.

To be sure, there has been some progress. At the World Mobile Congress in Barcelona this year, Japanese cell phone maker Kyocera Corp. for the second year running showed off a prototype of a 12.7-centimeter solar-powered phone. The so-far nameless device allows for a minute of talk time for every three minutes of sunlight—a big improvement over the company’s 2015 predecessor, which offered only 15 minutes for every two hours of solar charging.
To develop the phone Kyocera worked with France-based Sunpartner Technologies, which produces translucent film impregnated with photovoltaic cells. Being see-through, the film can be installed between the LCD display and the touch screen so that the phone can charge more easily while in use. Most previous efforts at solar-powered phones had the cells on the back, meaning that the device had to be facedown to get a charge and that the cells, being external, could more easily be damaged.

Kyocera says it expects to bring its solar-powered smartphone to market soon, possibly in time for the next Mobile World Congress in February 2017. The company says solar charging will not add much in the way of cost, so the phones are likely to have a price tag that is acceptable to users and the carriers that sell the handsets. Kyocera spokesman John Chier adds that the technology will most likely show up in one of its lines of phones geared for industrial or outdoor use. If they do become a hit, expect more gadget makers to follow suit.
SunPartner’s Wysips (for “what you see is photovoltaic surface”) film is 90 percent transparent, half a millimeter thick and uses a photovoltaic layer bonded to a network of microlenses. The photovoltaic cells are virtually transparent because they are so thin and also because they are distributed around a surface that contains “a plurality of active photovoltaic zones that are separated by transparent zones,” according to a 2014 patent filing. Bookeen, a Paris-based maker of E Ink electronic paper display readers, plans to use the technology in solar-powered chargers for its e-readers. French watchmaker Nevo plans to integrate the film into smartwatches.

Another trick is to design a photovoltaic cell that allows visible light to pass through while collecting energy from infrared and ultraviolet radiation. “The idea is to not even notice that you are recharging your phone,” says Vladimir Bulović, associate dean for innovation at Massachusetts Institute of Technology’s School of Engineering. Bulović, Richard Lunt of Michigan State University and former Lemelson–MIT Prize winner Miles Barr have used technology they developed to co-found Ubiquitous Energy, a Bay Area start-up developing transparent solar cells.

Comments Off on Where’s My Solar-Powered Phone? #Solar