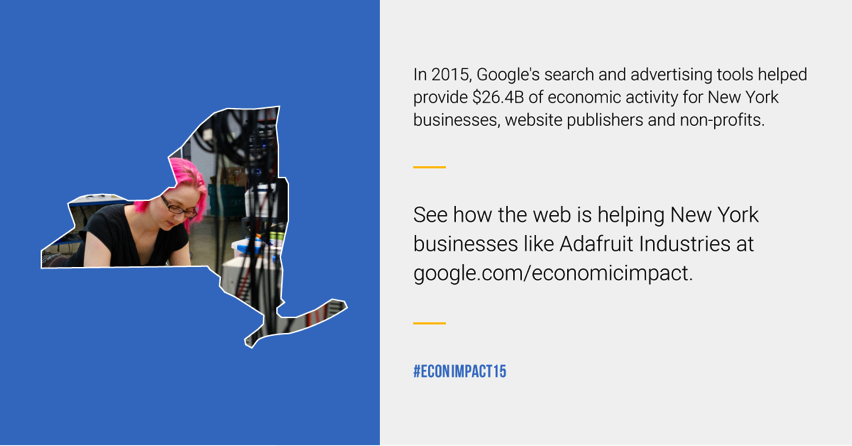 Adafruit Industries is proud to announce that we have been featured in Google’s 2015 Economic Impact Report! Read about our business and learn more about how the web is working for us and other New York businesses here.

“The more you document, publish, and share what you’re doing online, the more people will get excited about your business.” – Limor Fried, Founder & Lead Engineer

Limor “Ladyada” Fried, an MIT-trained electrical engineer, launched Adafruit Industries in 2005 to share and educate people about the fun and creativity of engineering. She started by writing a blog and selling DIY kits online so that people could build an MP3 player, cell-phone charger, or other useful devices. She also began offering online tutorials. Her New York City-based, 100% woman-owned business became immensely popular, growing organically without loans or venture capital. “Of everything that we have in our blog, our store, and tutorials, nothing is sponsored,” Limor says. “Whatever we post about, whatever we do, it’s because we like it.”

Adafruit started using AdWords, Google’s advertising program, in 2012. It now accounts for a third of the sales in their online shop, which is a Google Trusted Store. Adafruit uses Google Hangouts and their own YouTube channel to share tutorials and videos. “We post every day on YouTube, to show what’s happening behind the scenes at Adafruit,” Limor says. “It’s not just about how to use what we’re offering, but how we make it.” They use YouTube as well to stream a live weekly program called “Ask an Engineer.” Google Groups helps them build a strong online community, and their Google+ page has over two million followers.

The company gets a thousand orders a day for items made in their 50,000+ square-foot facility in SoHo. Total orders now top one million. Limor was on the cover of WIRED magazine and was named Entrepreneur of 2012 by Entrepreneur magazine. Adafruit has been so successful at attracting girls to engineering that a young fan once asked whether there were any boy engineers. “Engineering can be a force for good,” Limor says. “We’ve done such a good job of showing what engineering is like, and who engineers are, that we can actually change generational thinking. You can really change somebody’s life, if you get to them early and inspire them.”

View the report here and as a PDF here!