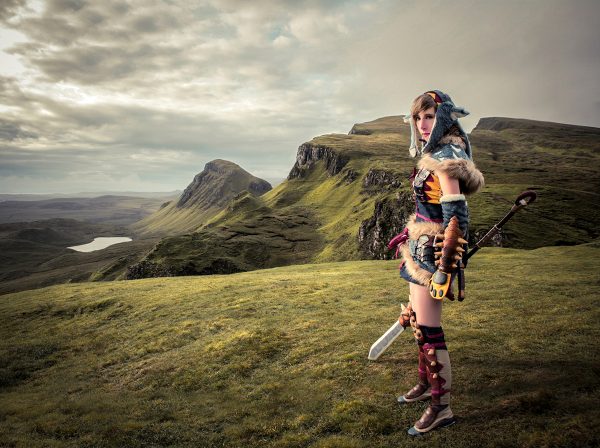 Syrupcookie is a prize-winning propmaker and cosplayer based in Netherlands. We’ve featured her stunning Hyrule Warriors Cia costume in the past, and it’s far from the only impressive costume she’s completed. She’s tackled a variety of projects featuring characters from different games and we asked her about her cosplay history and skills she’s learned because of the hobby.

Syrupcookie: An old friend of mine talked me into it, but in the end we never cosplayed together. I must admit, at first I was kind of hesitant to start with cosplaying since I found it a bit weird to dress up as fictional characters. But, I wanted to give it a shot and see for myself if I would like it or not. I first started cosplaying in 2010, though I didn’t knew how to sew my own costumes at that time. So, I started out with bought costumes and made the props and styled the wigs myself. When I saw the design of the character Lightning from Final Fantasy XIII-2 for the first time, I really wanted to cosplay that. But of course, this wasn’t available to buy online at that time so I had to make it myself. I didn’t really know how to start or what materials I had to use, so I made it all from simple craft foam and spray paints. It looked horrible though and ever since I made it in 2011, I wanted to redo it. I started looking up many tutorials and new materials and stumbled upon Wonderflex. In 2012 I got to debut my remake of this Lightning armor, all made with Wonderflex and ever since, I made my costumes all by myself.

Adafruit: Your Diablo III Auriel cosplay looks like it was quite labor intensive. What were some of the challenges of making that costume and did you like working with EL wire?

Syrupcookie: One of the biggest challenges was finding out and constructing a way to keep the wings securely on my back. I really liked working with EL wire. I cut and soldered them all by myself and connected them to the base of the wings. They were a great way to make the wings glow as the light is equally spread along the wires, but they can’t maintain their shape on their own. To keep them in shape, I put them in PVC pipes and shaped them with a heat gun so they would look like those archangel wings like in-game. 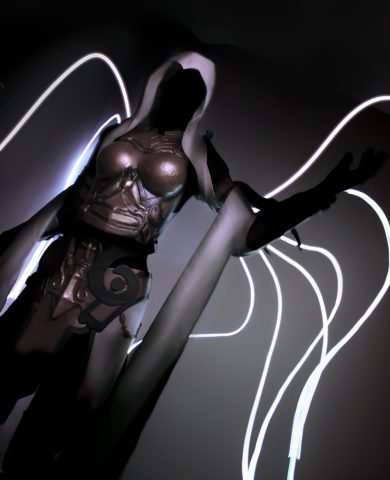 Another challenge was finding the right colors for her armor parts. Auriel has a very specific color-scheme and they were not easily found. In the end, I had to mix my green paint with some silver to get the metallic-green Auriel has. I had visited many shops and asked many about this color and all told me the same; Metallic green isn’t available as a commercial paint.
So next to the intensive labor of creating my first Worbla costume, there was a lot of research done beforehand.

Adafruit: What new skills have you had to learn because of cosplay?

Syrupcookie: Honestly? Probably everything. I learned basic sewing from my mother and wood-crafting from my father-in-law. The rest was pretty much learned from various tutorials online.

I challenge myself with every costume to learn new crafts, varying from Pepakura to using a Laser cutter and work with many, different materials.

My next learning project is building a vacuum-former and I hope this will help me in my cosplay and prop work. 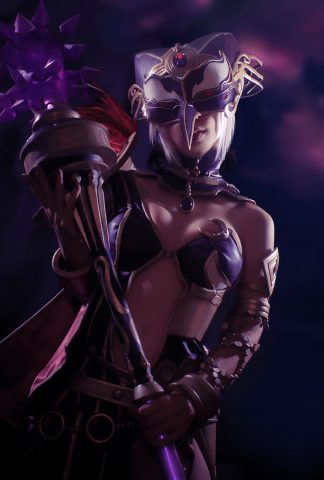 Adafruit: Your Cia cosplay looks like it’s right out of the game. What sort of work went into making it so screen accurate?

Syrupcookie: A lot of research. I pretty much know her whole design out of my head. I really wanted to make her as perfect as possible and for that, I wanted to use materials that I felt was what Cia used. The structure of her fabrics looked to me as a leathery-structure and thus, I used skai leather as my main choice of material. It was difficult to work with from time to time, but it worked out.

I also took note of the many shapes and Cia’s silhouette, for example, her headdress and mask or the cape that flares out at the bottom. It was also a first time for me working with resin. Cia has a lot of gems in her costume and they weren’t really standard shapes as well. So I had to sculpt them myself, make molds and cast them.

It doesn’t stop at only finding the right colors (like with Auriel). I made a lot of screenshots/photos from the game itself and also found a model of her, ripped from the game, that gave me lots of insights. But next to researching her whole outfit, I also researched the behavior of the character in-game. This helped me a lot for posing when wearing her.

Adafruit: What advice would you offer to those interesting in trying cosplay?

Syrupcookie: I’ve heard a lot of people are struggling with trying cosplay, since they don’t know for sure if it’s something they would enjoy. Since I’ve been there myself, I’d say just try it and see for yourself if you like it or not. You might end up enjoying it so much, you’d never want to stop!

But for the new cosplayers out there, I suggest not being afraid of trying something new. If you think something’s out of your league, you haven’t tried it yet. Give a difficult project a shot and learn lots of new things. You don’t have to pump out a costume every month. Take as long as you like to get the results you’ll love.

Comments Off on Cosplay Interview with Syrupcookie